The online petition has gathered over 8,000 signatures in two days.

Over 8,000 people have signed an online petition to ‘get Paddy Jackson and Stuart Olding back playing for Ulster Rugby’ in the space of two days after it was set up on the website change.org over the weekend.

The petition calls for Jackson and Olding to be “reinstated to the Ulster Rugby squad as soon as possible” after they were found not guilty of raping a 19-year-old student in June 2016 and acquitted of all charges in relation to the incident in Belfast Crown Court last month.

The petition says that the fact that Jackson and Olding have “already been forced through a very public trial and been suspended from playing throughout this trial” is “punishment enough” and that “Ulster Rugby should be showing support to their players who were found not guilty”. 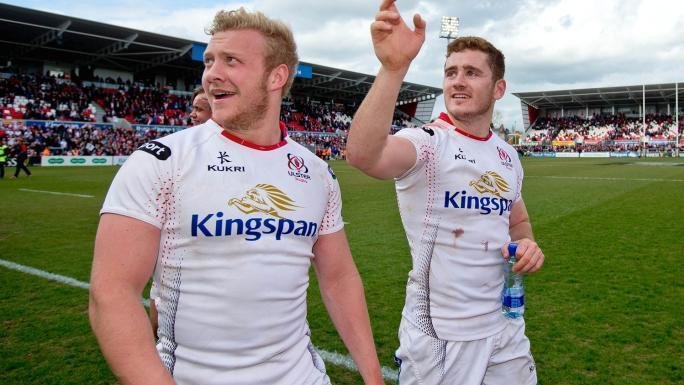 “If Ulster Rugby need to enforce to these players how behaviour in their private lives may affect their career as rugby players then this should be stated clearly to the players as a warning not to repeat such behaviour again as it will carry consequences for themselves and others such as what they have gone through,” the petition reads.

“However, these players have not broken any sporting rules and therefore, need to be back playing in Ulster shirts as soon as possible.”

The petition also calls for support for Craig Gilroy, who was dropped for Ulster’s Guinness PRO 14 clash with Edinburgh last Friday as he was subject to an internal review by Ulster Rugby and the IRFU in relation to WhatsApp messages that were used as evidence during the trial.

Gilroy issued a statement apologising for his behaviour last week.

“Those who have signed this petition want Ulster Rugby to do the right thing and support their players by getting them playing rugby for Ulster again,” the final sentence of the petition reads.

At the weekend, an advertisement was placed in The Belfast Telegraph urging Ulster Rugby and the IRFU to never allow Jackson and Olding to play for Ulster or Ireland again in the future.

A crowd-funded ad has been placed in the Belfast Telegraph today calling for Paddy Jackson and Stuart Olding to never play for Ulster or Ireland again https://t.co/TjFSBC541D pic.twitter.com/AqrsbhUFTI

The advertisement, paid for by a crowdfunding campaign that attracted contributions from over 130 people and authored by “concerned fans”, described the social media exchanges involving Jackson and Olding as “reprehensible” and included a demand that “neither of these men represents Ulster or Ireland now or at any point in the future”.

On Friday, Jackson issued a statement to say that public criticism of his behaviour was “fully justified” and that he was “ashamed that a young woman who was a visitor in my house left in a distressed state”.

Jackson and Olding have been stood down for duty for Ulster and Ireland since charges were brought against them in July 2017.

Both players are the subject of a review by Ulster Rugby and the IRFU and will continue to be relieved of all duties while the review committee is in process and determining its findings.

In a statement to JOE, a spokesperson for Ulster Rugby said: "The IRFU and Ulster Rugby have advised that a review process in relation to this matter is underway and it would be inappropriate to comment on any matter pertaining to that process until it is completed."

popular
PERSONALITY QUIZ: Which Normal People character are you?
There's a special offer that lets you stay at TWO Irish castles the summer, and it's the five-star holiday of our dreams
From Miami to Mallow: The Irish Instagram star who's renovating an old post office during lockdown
The Skin Nerd on updating your lockdown skincare routine, and picking spots - if you HAVE to
5 ways you can help the George Floyd protesters and Black Lives Matter movement
After days of silence, Scott and Sofia finally comment on the break up rumours
I tinted my eyebrows with fake tan - and other TikTok beauty hacks you should know
You may also like
5 days ago
'Completely lost': Model Sarah Morrissey shares touching tribute to mother after recent passing
2 weeks ago
Duffy felt 'liberated' after sharing kidnapping ordeal, encourages fans to talk
2 weeks ago
'Not just a celebration': Creators of Avocado Toast the series talk sex, sexuality, and swinging
1 month ago
'Until we meet again' Samantha Mumba shares tribute to dad who passed away last month
1 month ago
Cork girl battled cancer at 20 months old - now she and her mum are fighting for research funding
1 month ago
#Covid-19: 36 further deaths, 345 new cases of coronavirus in the Republic of Ireland
Next Page