Time Magazine's Person of the Year 2017 has been announced

The ‘Silence Breakers’, the individuals who came forward to open a conversation about sexual harassment, have been named Time's Person of the Year for 2017.

The movement, which was launched in the wake of sexual harassment allegations and charges against Harvey Weinstein and a number of other high-profile men in Hollywood, is credited with beginning "one of the highest-velocity shifts in our culture since the 1960s".

The publication’s editor-in-chief, Edward Felsenthal, made the announcement on Wednesday morning’s TODAY show.

Mr Felsenthal said in a statement:

"The galvanizing actions of the women on our cover…along with those of hundreds of others, and of many men as well, have unleashed one of the highest-velocity shifts in our culture since the 1960s.” 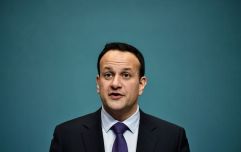 END_OF_DOCUMENT_TOKEN_TO_BE_REPLACED

The magazine editor noted that the hashtag #MeToo, which he called a “powerful accelerant”, has been used in at least 85 countries.

Since 1927, Time Magazine has awarded the Person of the Year title to an individual or group of people who the magazine editors believe influenced news and events over the last year “for good or ill”.

"The idea that influential, inspirational individuals shape the world could not be more apt this year.

"For giving voice to open secrets, for moving whisper networks onto social networks, for pushing us all to stop accepting the unacceptable, The Silence Breakers are the 2017 Person of the Year.”

popular
Staycation: 10 bargain buys to turn your back garden into a chic hotel patio
H&M launches brand new surf collaboration collection – and we're ready to hit the waves
Penneys set to reopen Irish stores next week with social distancing measures in place
So, William and Harry have a step sister... and who knew?
People are freaking out thinking that their star signs have changed
Someone has ranked the penis size of men from all over the world
'There will be tears': Kate Garraway says husband could be in a coma for a year due to #Covid-19
You may also like
1 day ago
#Covid-19: International travel to return for countries where curve has been flattened
1 day ago
Eight dogs believed to be worth €5,000 seized by Gardaí in Co. Tipperary
1 day ago
'Here is not like America': Amanda Adé on Ireland's racism and hope for the future
3 days ago
New suspect identified in Madeleine McCann disappearance case
4 days ago
Brown Thomas and Arnotts to phase reopening from next week
4 days ago
Blackout Tuesday: Here's why Instagram users are sharing black squares today
Next Page