Trinity College has called on the government to work closer with Irish universities.

Trinity College Dublin's position in an international university rankings table has slipped significantly after dropping 44 places in the World University Rankings on Wednesday.

The university is now rated as 164th best in the world in the Times Higher Education list falling from the 120th spot in last year's rankings.

TCD is the only Irish representative in the top 200 universities as UCD, Queens University Belfast and the Royal College of Surgeons in Ireland ranked between 201 and 250 - with the remaining Irish colleges ranking lower than that.

The college has said the "disappointing" decline is relative to other countries' investment in education.

In a statement on Wednesday, Trinity College Dublin called on the government to work with universities to develop a national strategy on rankings to reverse the slide in rankings witnessed in many Irish universities over the past decade. 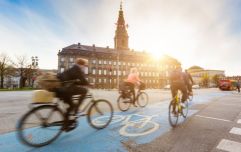 Liffey Cycle Route trial looks to be going ahead

END_OF_DOCUMENT_TOKEN_TO_BE_REPLACED

“It also follows de-funding of investigator-led research funding to universities, having an impact on publication output and innovation. A similar fall next year would mean that no university in Ireland would be ranked in the top 200 by Times Higher Education,” the university said.

The Times Higher Education World University rankings are published annually and measure and compare the performance of institutions from around the world using a variety of measurements.

You can find the full list and more information on the Times Higher Education World University Rankings here.


popular
Netflix have announced the release date for the new series written by Downton Abbey creator Julian Fellowes
Ariana Grande just dropped a breakup song about Pete Davidson AND Mac Miller
Holly Willoughby wore the most divine polka dot mini dress last night, and we need it
Kathryn Thomas' Instagram post is the underwear photo we needed to see right now
Brad Pitt JUST responded to speculation about his relationship with Jennifer Aniston
The €25 New look jumper that would be a cosy dream on cold mornings
So, William and Harry have a step sister... and who knew?
You may also like
1 day ago
Pygmalion nightclub drops entry fee and asks for charity donation instead
1 day ago
Ireland's best places to work for 2020 have been revealed
2 days ago
Rain, hail, sleet, snow and thunder in store for Ireland this weekend
4 days ago
Irish citizens advised not to travel to parts of Italy affected by coronavirus
1 week ago
History to be required Junior Cycle subject from September
2 weeks ago
Met Éireann issues rainfall warning for all of Ireland
Next Page