A great advance for gender equality has been made over in the UK today.

The Government Equalities Office has issued a lengthy report about closing the gender pay gap between men and women.

This news comes after a report from the World Economic Forum last year which revealed that women are a decade behind men on average in terms of pay equality. 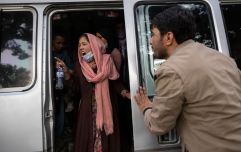 END_OF_DOCUMENT_TOKEN_TO_BE_REPLACED

The new regulations will force companies with more than 250 employees to reveal their pay gap, and those who fail to address discrepancies will be featured in a league table.

The report reads: "Increasing transparency around gender pay differences will enable the impact of those workplace policies and practices promoting gender equality to be monitored and remedial action to be prioritised."

Equalities Minister Nicky Morgan stated: "I'm calling on women across Britain to use their position as employees and consumers to demand more from businesses, ensuring their talents are given the recognition and reward they deserve."

Tesco stated: “We believe that monitoring the pay gap between men and women is crucial to ensuring everyone is fairly rewarded for their work and enjoys the same opportunities.”

Hopefully, this report will encourage other countries to tackle the problem and ensure equal pay for equal work.

popular
Smyths issues warning to parents ahead of Christmas
An All-Stars I'm A Celeb is officially happening
Riverdale actor Ryan Grantham charged with murder of his mother
Rylan Clark was hospitalised with two heart failures after marriage breakdown
So, William and Harry have a step sister... and who knew?
RuPaul's Drag Race star Cherry Valentine passes away aged 28
Post Malone dramatically falls through stage during concert
You may also like
4 weeks ago
My Fair Lady star Lesley Garrett on the feminist take on the show
6 months ago
Opinion: Fourth wave feminism, what's needed now?
11 months ago
Saoirse Ronan to produce upcoming feminist series, Girls Can't Shoot (& Other Lies)
3 years ago
'I am doing my best to be better': Seven affirmations for International Women’s Day
3 years ago
Bryan Cranston proves he's the ultimate feminist in supportive Instagram post
3 years ago
'Santa Baby' is the latest Christmas song to come under criticism as Miley Cyrus changes lyrics
Next Page