After much drama and heated discussion following the Tesco Ulster Intermediate Club Football Final on Sunday, Ulster Council have officially awarded the cup to Monaghan Harps.

Controversy has surrounded the game between Four Masters and Monaghan Harps since Sunday as, when the final whistle sounded, there were three different results in play – that of the referee, that of the scoreboard and one announced by Ulster Council representatives.

However, it now appears as though the scoreboard, which showed Monaghan Harps winning by a point, has been deemed the correct score.

END_OF_DOCUMENT_TOKEN_TO_BE_REPLACED 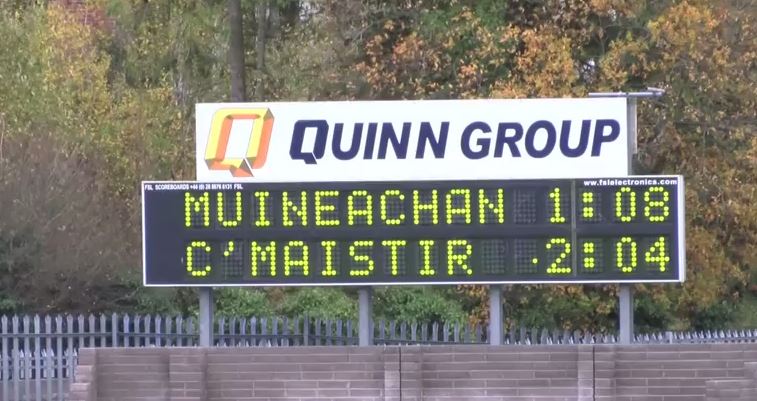 The scoreboard on the day has been affirmed to be correct. (Pic: Jerome Quinn)

Speaking about the incident, Jerome Quinn explained: “They (Four Masters) had been told by the referee that they were winning the game.

“The referee has now admitted making a genuine mistake in the scoring. He told Four Masters players that they were in front which explains why they were in no great hurry to get on with the game in the last few minutes,” he continued, explaining that Four Masters can be seen celebrating in the video (below) at the end of the game as they thought they had won.

“Now Ulster Council has awarded the title to Monaghan Harps based on the simple fact that they won on the score board,” Jerome continued, “but an appeal is expected from Four Masters.”

popular
Molly-Mae Hague fans think they officially know her baby's name – and it means cloud
"I feel like I lost myself": Nathalie Lennon on her mental health struggles and her latest project with Pieta
Baby found unattended in pram in Dublin, Gardaí reveal
Joanna Cooper heartbroken after her mum is diagnosed with dementia
Tasha Ghouri hits back at another islander who called her relationship fake
Conor Mcgregor hit by car ‘at full speed’ while cycling
Gwen Stefani reportedly pregnant with baby number four
You may also like
2 months ago
Irish airport features in list of world’s most beautiful runways
3 months ago
First funerals of Creeslough victims to take place today
3 months ago
King Charles sends message of condolence to the people of Creeslough
3 months ago
How to support those affected by the tragedy in Creeslough
3 months ago
Gardaí confirm identities of 10 killed in Creeslough petrol station explosion
3 months ago
Emergency services rush to petrol station in Donegal following explosion
Next Page