Tánaiste Joan Burton was in the firing line during protests in Jobstown over the weekend as videos have surfaced showing the politician being confronted by angry protesters.

The videos show Irish Water protests in Dublin, with one depicting Joan Burton being hit with a water balloon during the protest which took place while she was attending a graduation ceremony at Cósan College.

The protests have received a lot of criticism due to the treatment of the Tánaiste as the footage shows her getting hit quite hard on the side of her head. Although she recovers quickly, it is apparent that the incident left her shaken during what was supposed to be a “peaceful protest”. 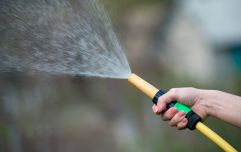 END_OF_DOCUMENT_TOKEN_TO_BE_REPLACED

Her car was then later surrounded by protestors chanting a number of different slogans, in what Katherine Zappone, Independent senator, described to Newstalk as “menacing behaviour”.

popular
Smyths issues warning to parents ahead of Christmas
So, William and Harry have a step sister... and who knew?
Netflix's true crime series Sins of our Mother is seriously insane
Post Malone dramatically falls through stage during concert
Ozzy and Sharon Osbourne have announced they're to divorce
Why Are Men so Obsessed With Boobs? The Answer is Pretty Surprising...
Beauty advent calendars: We found the best ones to buy for 2022
You may also like
2 years ago
Boil water notice affecting 600,000 people to stay in place until at least Tuesday
2 years ago
Second boil water notice issued for parts of Dublin, Kildare and Meath
3 years ago
Irish public warned of increased levels of cryptosporidium in drinking water supplies
3 years ago
Irish Water to begin charging people for overuse of water
4 years ago
Irish Water issue statement saying that the hosepipe ban has been extended
4 years ago
Dublin's primary water supply could run dry in 70 days
Next Page