Unless you’ve been living under a rock the past week, a recent video highlighting one woman’s attempts to walk through New York while being catcalled has been doing the rounds online. Amongst issues of respect and etiquette, the video has sparked anger over women’s safety and rights.

So when a male guest contributor on CNN, who was brought on to debate the message behind the viral video, started sharing some of his views there was some definite tension in the studio.

Steve Santagti and Amanda Seales were invited onto the show to discuss the catcalling video, when Santagi suggested that women wouldn’t be upset if the men calling out to them were attractive. 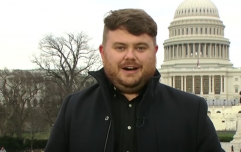 END_OF_DOCUMENT_TOKEN_TO_BE_REPLACED

The author later advises women upset by catcalling to be “strong” and “carry a gun”. He also added that women “love nothing more than being told how pretty they are”.

Needless to say, his co-contributors were less than impressed with his opinion.

The eight minute clip is now on its way to being a viral sensation all of its own accord.

popular
A celebrity hairstylist just shared a genius hack for the perfect messy bun
16 and Pregnant star Jordan Cashmyer dies aged 26
Here are all the Instagram accounts of the stars of Netflix's Cheer
Coming to terms with the fact that you're a Charlotte
Here's what happens on every day of your menstrual cycle (roughly)
There's a challenge on TikTok going viral because apparently, only women can do it
Someone has ranked the penis size of men from all over the world
You may also like
2 weeks ago
WATCH: CNN's Donie O'Sullivan reports as Irish couple get engaged on New Year's Eve
1 month ago
How do Ireland's Covid restrictions compare to the rest of Europe?
4 months ago
A documentary about Kerry CNN reporter Donie O'Sullivan is coming
4 years ago
This CNN reporter had two wedding dresses and both are beautiful
5 years ago
CNN news w-anchor embarrasses himself live on TV reporting on Prince's death
6 years ago
CNN Made A Very Embarrassing Mistake When Reporting On The Gay Pride Parade
Next Page