Here are the winning numbers for tonight's €4.5 million Lotto draw

It's been almost a month since someone won the main jackpot.

And now the numbers for tonight's €4.5 million Lotto draw are in - so it's time to grab those tickets.

The jackpot prize has been rolling over since Saturday September 21, when a Lotto player in Cork won €5,325,592. 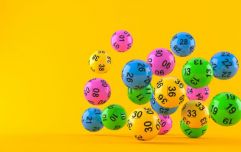 END_OF_DOCUMENT_TOKEN_TO_BE_REPLACED

It comes as the lucky winner in September admitted that she didn't realise she had won the Lotto's top prize until a day later - as her Internet had been down.

Speaking at Lotto HQ as she collected her prize last month, she said:

"I normally check my tickets on the app or online pretty soon after the draw but I couldn’t get a broadband connection all day.

"It’s only when a WhatsApp message finally came through from a relative later that night that I discovered the broadband was back working and the Lotto had been won.

"That prompted me to check the ticket and I was gobsmacked when I saw the numbers match one of the panels on the ticket.

"I checked about 50 times that I didn’t make a mistake or that the dates were incorrect. I said to my husband ‘I think we won the Lotto’ and he didn’t even look up from the newspaper he was reading.

"Finally, he checked the ticket and low and behold, we haven’t had a wink of sleep since! Who knows, if I never got that WhatsApp message maybe I still wouldn’t have discovered that I won the Lotto."

popular
Tributes pour in for designer Virgil Abloh following death at 41
8 of the hottest make-up trends to try this festive season
The internet can't deal with Ryan Tubridy's Toy Show opening
Japan to close its borders to tourists to prevent Omicron spread
The best memes from this year's Late Late Toy Show
Why we should all be doing a reverse advent calendar this Christmas
Strictly's Giovanni Pernice responds to dating rumours following split from Maura Higgins
You may also like
1 year ago
The EuroJackpot lotto is at a record €90M this week - here's how to play from Ireland
1 year ago
Winning €9.7 million lotto ticket sold in Killarney
1 year ago
Someone in Ireland is €311,413 richer after Wednesday's Lotto draw
1 year ago
WATCH: For the first time since 2011, someone has won the Winning Streak jackpot of €500,000
2 years ago
The winning numbers for tonight's €5.5 million Lotto draw have been announced
2 years ago
Someone in Offaly won €148k in last night's Lotto draw
Next Page