A woman in the UK has been brought to court after lying about terminal cancer to raise money for her wedding.

Danielle Watson had claimed that she had been diagnosed with stage four cervical cancer, telling her fiancé and family that she wanted to bring her wedding forward so she could marry before she lost her hair from chemotherapy and radiotherapy.

The then 21-year-old also claimed donations, freebies and cut-price deals for her upcoming wedding worth almost £10,000 before it emerged that she had undergone minor surgery for a treatable gynaecological condition and had never been diagnosed with cancer. 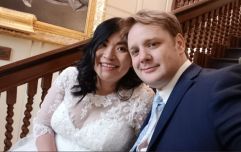 END_OF_DOCUMENT_TOKEN_TO_BE_REPLACED

According to the Daily Mail, wedding planner Leigh Stewart gave Watson free help worth £1,100 and helped raise thousands more in donations, telling the court that she closed her business "partly due to what happened".

"It’s appalling, she affected my family, my life, my work. Not just me, lots of people. I think she needs help. It is not a logical mind that does that."

Watson, who is now pregnant with her second child, initially pleaded not guilty to the fraud charges but changed her plea to guilty on the first day of her trial and could now face a jail sentence.

popular
WATCH: Parents see person walk past daughter's crib in creepy baby monitor footage
Young woman suffers serious eye injury after being struck with a firework in Eyre Square
Heavy rain and unsettled conditions forecast for Bank Holiday weekend
At least seven bodies have been found in search for Brian Laundrie
Maria von Trapp's daughter has died aged 90
Human remains found positively identified as Brian Laundrie
Weather warning issued for 2 counties ahead of "heavy rain" this weekend
You may also like
2 days ago
Groom kicks out wedding guests after they all wear white
3 days ago
Cast members of Schitt's Creek reunite for Sarah Levy's wedding
3 days ago
Jamie Redknapp marries girlfriend without ever announcing engagement
1 week ago
Bride disinvites woman from wedding, still wants to wear her dress
2 weeks ago
Best man's hilarious comment picked in TikTok up as newlyweds have their first dance
2 weeks ago
Bride asks guests to pay per slice of cake eaten at wedding
Next Page