"Imagine being told you're the best in the world at something, then just stopping".

Jenni Murphy's bodybuilding coach told her that she needed to represent Ireland on an international scale, she was told she had the genetics to go all the way...so she did.

The 35-year-old Dublin native has been competing as a bodybuilder for the last few years, she currently holds the title of WFF's Miss World as well as NABBA's Miss Athletic World and Miss Toned Figure Champion of Ireland.

On this week's episode of Girls With Goals, Jenni chats to Niamh Maher about how she got into bodybuilding in the first place and why she decided to retire while at the top of her game.

Listen in at 19:17 in the link below or continue reading:

Jenni was seven years training in gyms across Dublin before she got involved in competitive bodybuilding, she explained what spurned her on originally:

"I just wanted a goal, I started it because I wanted to see what my body was capable of and I wanted a challenge. It's like Ireland going to the World Cup, you have to really believe that you're going to win. There's no point in competing if you're just there to get a good Instagram photo".

If you log onto Instagram the place is awash with bodybuilders. The bikini category is arguably the most popular in Ireland at the moment, up from that is toned: which is what Jenni competes in, further on from that there's trained: which is more muscle mass again. As Jenni explains, new categories are cropping up in federations across the globe as the hunger and popularity for competitive bodybuilding continues to grow. 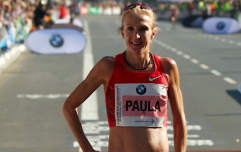 EXCLUSIVE : Paula Radcliffe weighs in on doping in sport

END_OF_DOCUMENT_TOKEN_TO_BE_REPLACED

In the podcast, Jenni highlights the problems that social media can pose in the world of bodybuilding. She explains that  every girl who looks good in a bikini now wants to give it a shot, what they don't realise is that you actually need a training background and having muscle age in your body is a huge bonus, also genetics does come into play:

"My body type is genetically made for this, there are certain things you cannot change, I am really gifted thanks to my mam".

So having been crowned World Champion, why would you walk away from something you have so much passion for?

"I needed to be proud of my accomplishments and pass the torch, it was a huge part of my life for years, it was my identity and something I was really good at. Despite this I needed a life, I needed to have more fun. My body needed a rest, it's mentally very hard, I've achieved everything that most people only dream of, I wanted to go out on top"

Although bodybuilding is now in her past, Jenni does have her pro card and she may return to competition at some point in the future. For now, she says she's loving her food and working as her own boss to help make people stronger every day:

"I have a lot of women who are in powerful jobs, they might be going into a boardroom full of twenty or thirty men and they've just deadlifted all of the men's bodyweight, they feel amazing and they feel like they can take on the world."

Check out the full interview with Jenni on Episode 4 of our brand new podcast Girls With Goals. New episodes are available on iTunes and Soundcloud every Monday morning from 7am.

popular
Maisie Williams speaks about "traumatic" relationship with father
Here are the baby name trends set to dominate 2023
5 delicious brunch spots around Ireland to try out on your next trip with the girls
Here is the reported I'm A Celeb All Stars line-up
Doctors move young girl to Dublin hospital after Co. Clare incident
Two Love Island 2022 stars have just become step siblings...
The beginner's guide to upcycling: 3 essential tips for embracing DIY at home
You may also like
6 hours ago
Maisie Williams speaks about "traumatic" relationship with father
6 days ago
Indiyah Polack shares how islanders get away with having private, unaired conversations
3 months ago
Vogue Williams on why Spencer gives her the "ick"
3 months ago
The 2 Johnnies say over 100 people have contacted them about the GAA catfish
4 months ago
The 2 Johnnies set to update fans on catfish situation soon
4 months ago
The 2 Johnnies share unbelievable catfish ordeal as woman 'targets 40 people'
Next Page