Laura McGinley is not fond of spare time.

She likes to keep busy and between her basketball, Gaelic football and studying at DCU, she makes sure that there's not an awful lot of time sitting on the couch.

"It's such a foreign thing to me to go home in the evenings and do nothing. I love being busy and my best friends are all on the football team so I get to see them there but yeah the football keeps me very busy."

Football brought her to DCU, it brought her some of her best days out in Croke Park and it also spurred on an impromptu singing career that has led to gigs from Howth to Monaghan.

The spring will be a little bit quieter for McGinley who chose to walk away from the Dublin panel this year with a J1 trip to San Diego on the horizon.

She admits that it was tough to watch on from the stands during the Jacks' recent comeback win over Mayo and sitting out is a relatively new experience for her after being steeped in Dublin football for so long.

"My dad would have brought me to training and all the trials when I was younger but when I was in U16's I made five very good friends and they're still in the senior team now".

"When you've been with people four or five times a week, and you've made a connection and you'd do anything for them, it turns into something off the pitch and I think I've found that a lot with the girls I've played with throughout the years. That connection.

"Even on our team holiday I remember one of our last team nights out together and it just kind of hit me that 'oh my god' this is the last time I'm going to be with the team for like the next year.

"I was really upset about it and I didn't think I would be because I thought it was just a hobby but it's more than a hobby to me, it's something I put everything into for nine or 10 months of the year for this one thing. You give up so much for it."

As she closes out the third year of college, she looks forward to an exciting summer along the west coast of the United States. 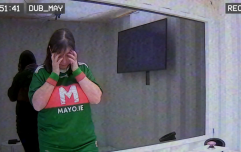 END_OF_DOCUMENT_TOKEN_TO_BE_REPLACED

It's likely to be a lot more relaxed than the previous summer where she was preparing to try and defend an All-Ireland title after the Dubs finally ousted Mayo the season before.

Football gives McGinley a focus, a wider friendship group, and at times it means declining holidays and other aspects of student life, but the effort required is ultimately justified when she's able to climb the steps of the Hogan Stand.

"Then coming up to senior, having played a few All-Ireland finals in minor and semi's and losing them, then going on to win in Croke Park was just the best feeling ever. I can't describe it. It's indescribable. I didn't get much game time last year and I did get more this year but even just being a part of that is just such a memorable experience."

She will look to link up with the local GAA club in San Diego on her travels and Dublin will be in her future, if manager Mick Bohan is willing to have her back she jokes. For now, it's all smiles, songs and enjoying college.


popular
'That’s the most honest answer': Skeet Ulrich reveals why he is leaving Riverdale
Debby Ryan got married and her dress was absolutely stunning
Brad Pitt's got a new girlfriend and no, calm down, it's not Jennifer Aniston
QUIZ: How well do you remember Angus, Thongs and Perfect Snogging (the movie)
So, William and Harry have a step sister... and who knew?
Lidl will be selling wine cooler handbags with a secret nozzle soon and, absolute scenes
Here is everything that is going to be coming to Netflix in June
You may also like
2 weeks ago
Shake up your hump day with pre-made Margaritas from Dublin's 777
1 month ago
#Covid-19: Dublin Pride parade and festival postponed until September
1 month ago
#socialdistancing: Dublin nail salon delivers gel polish removal packs to your doorstep
2 months ago
#Covid19: Dublin's drive-in movie theatre cancels screenings due to government restrictions
2 months ago
Dublin child seriously injured following attack by dogs in Dublin
2 months ago
Dublin is the third most expensive city in the world for fish and chips
Next Page