In case you missed it, and there's a good chance that you might have, Jennifer Lawrence is getting married.

Yes, your girl Jen is settling down and celebrated with an engagement party in New York over the weekend.

She and husband-to-be Cooke Maroney hosted friends and family at a bash in the city on Sunday evening.

Never one to do things by halves, Jennifer wore a dreamy peach coloured gown by L. Wells Bridal for the occasion.

Her stylists Jill Lincoln and Jordan Johnson shared a photo of Jen from the night, congratulating her on her engagement.

"We couldn’t be happier and more excited for #jenniferlawrence to become a #MRS. This weekend we toasted Jen and her groom to be.. too good of a time was had by all."

The big news was confirmed in February after she was spotted out wearing a massive ring on her left hand. 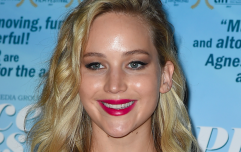 END_OF_DOCUMENT_TOKEN_TO_BE_REPLACED

We don't know how long she and Cooke, 34, have been together but they were first linked to one another last June.

Page Six reported then that they were set up by Jennifer's longtime best friend Laura Simpson.

A source told People that he is a "great guy".

"He’s smart and funny and I think really keeps her on her toes and he doesn’t treat her like a celebrity like the other boyfriends did."