Saoirse Ronan is fast-becoming one of our favourite leading ladies.

Not only is she Irish and can act, as she has proven with roles in the likes of Atonement and The Lovely Bones, but she’s also got great style.

The 21-year-old actress stepped out in Dublin tonight for the premiere of her new film Brooklyn and she looked absolutely stunning.

Our incredible leading lady Saoirse Ronan has arrived at the #Brooklyn premiere, and doesn't she look stunning! pic.twitter.com/2vJ8rsZgt8

She, along with a few other members of the cast, took to the red carpet and spoke to fans at the Savoy cinema.

Saoirse opted for a floor-length gown for the occasion (it is Ireland and the end of October after all!) and wore her hair down.

Brooklyn, which will be released in cinemas nationwide next month, is a beautiful film about a young woman who moves from Enniscorthy to Brooklyn to create a new life for herself. 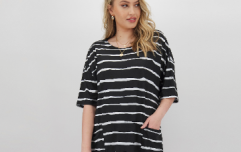 END_OF_DOCUMENT_TOKEN_TO_BE_REPLACED

It was directed by John Crowley and adapted from Colm Tóibín's novel of the same name.

Trust us, it’s definitely worth going to see… we would advise wearing waterproof mascara and throwing a box of tissues into your bag though.

popular
Women and girls struggling with access to period products during #Covid-19, research shows
Paul Mescal wore O'Neill's shorts while carrying cans of pink gin so I bought O'Neill's shorts and cans of pink gin
This amazing hanging egg chair is coming into Aldi next week and go, go go (but safely)!
"What a gent": Matt Damon signs Irish artist's drawing in aid of Pieta House
Her Quarantine Quiz Week 9: Iconic Irish music videos
5 reasons why we need more videos of Doireann Garrihy's new puppy immediately
After days of silence, Scott and Sofia finally comment on the break up rumours
You may also like
2 weeks ago
3 fab SimplyBe lounge wear bits that we'll still be wearing well after lockdown ends
2 weeks ago
Three Zara summer dresses we want in our wardrobes for when the world reopens
2 weeks ago
Tommy Hilfiger lounge wear that makes staying at home seriously stylish
3 weeks ago
Cabin fever or just creative? People have started making dresses out of shopping bags now
1 month ago
Sustainable engagement rings are now a thing and they definitely have wow factor
1 month ago
New app hopes to help small Irish fashion retailers 'thrive' during #Covid-19
Next Page