The Wild Atlantic Way does it again.

Donegal Airport has been voted the most scenic airport in the world, according to the 2020 edition of the annual scenic airports poll by PrivateFly, a global booking service for private jet charter and private aircraft hire.

Chosen by thousands of travellers from across the globe and a panel of travel industry judges, this year's decision sees the Carrickfinn airport claim the the top spot on the list for the third year in a row.

Voters in the competition said: "You can see all the islands, beautiful beaches. Errigal and the Rosses on the approach. Truly wild Atlantic way.

"It’s just the most wonderful scenery in the world."

Set up in 1986, the airport was originally only a grass strip with a tarmac runway and temporary buildings. However, in the 1990s, permanent terminal buildings were constructed and the runway was extended.

Currently, Donegal Airport is used by one scheduled airline and for private charter flights. 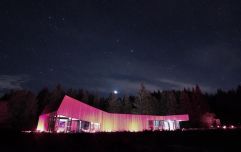 END_OF_DOCUMENT_TOKEN_TO_BE_REPLACED

The top 10 most scenic airport landings in the world can be seen in full below.


popular
Yellow rainfall weather warning issued for seven counties
Aldi is selling a €20 coffee machine that's designed to "Brew and Go"
A new €1.3 million stargazing experience opens in Co. Tyrone next month
Someone has ranked the penis size of men from all over the world
Your guide to styling this autumn's staple knit, the dad vest
Kate Middleton has addressed the rumours that she's pregnant with her fourth child
'Beard-baiting' is now apparently a dating trend - and we're all for it

You may also like
1 day ago
Ireland's updated Green List comes into effect with just four countries remaining
5 days ago
Ryanair launches first ever ‘Buy One, Get One Free’ offer
2 weeks ago
You can now spend the night in The Fresh Prince of Belair's gaff
3 weeks ago
Staycation: 5 couples packages to spice up your September
3 weeks ago
Staycation subsidy: Here's more details on the Stay and Spend scheme
3 weeks ago
E.T. and Willy Wonka and the Chocolate Factory screening at Dublin drive-in cinema this weekend
Next Page