How cool does this look?

Are you a die hard Star Wars fan?

Well, prepare for the best news ever folks.

Before you get too excited, it hasn't opened yet, however reservations for Star Wars: Galactic Starcruiser, will open later this year.

We can only imagine the waiting lists...

So, what does the hotel entail, I hear you ask?

Star Wars: Galactic Starcruiser is a Star Wars-themed luxury hotel currently being built near Disney's Hollywood Studios, in the Epcot Resort Area of the Walt Disney World Resort in Florida, and is scheduled to open in 2021.

Hear from Executive Producer Ann Morrow Johnson who shares exciting details about @StarWars: #GalacticStarcruiser, debuting in 2021 at #WaltDisneyWorld in Florida. This new two-day, two-night vacation is an all-immersive experience that will take guests to a galaxy far, far away in a way that only Disney could create. Read more on @disneyparksblog: https://bit.ly/2UwyjTx

A post shared by Walt Disney Imagineering (@waltdisneyimagineering) on Feb 6, 2020 at 2:22pm PST 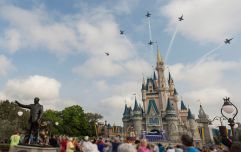 END_OF_DOCUMENT_TOKEN_TO_BE_REPLACED

Bob Chapek, Chairman of Walt Disney Parks & Resorts, stated that the Star Wars hotel would be Disney's "most experiential concept ever" when it opens.

Chapek described the hotel as a "100 percent immersive" experience that "will culminate in a unique journey for every person who visits.”

Some examples of the planned features included creatures and droids acting as certain hotel staff such as butlers; guests wearing Star Wars costumes; and an ability to interact with features of the hotel as if visitors were really in the Star Wars universe.

Visitors would also be able to have lightsaber training and duels (an extension of the Jedi Training Academy in Disney's Hollywood Studios); explore and pilot Star Wars spacecraft; and go on "secret missions" personalised toward the visitors' experience.


popular
'Be A Lady, They Said!' You need to watch this incredibly powerful video about being a woman
BRB, running to Penneys for the €19 trousers that look like they cost ten times the price
Holly Willoughby's Zara shirt is the workwear must-have you need in your life
Netflix's Babies documentary is making quite the impression online
'Be a lady they said' made waves yesterday, at the exact moment it should have
The dress that Holly Willoughby wore this morning is getting very mixed reactions
The comfy €42 M&S boots we're going to be living in all spring
You may also like
5 months ago
Someone proposed to Minnie Mouse, and Mickey was pretty PISSED
6 months ago
Disney have released new Nightmare Before Christmas ears and they are absolutely spook-tacular
6 months ago
Mum claims people without children should be banned from Disney World
10 months ago
Heading to Disney soon? Here are 5 things that are banned from the parks
1 year ago
Disney World has started selling alcoholic ice-pops, and we need to visit ASAP
1 year ago
Disney World is offering princess makeovers to adults... and sign us up please
Next Page