The snake was underweight, dehydrated, and injured.

A very large snake was found abandoned in the Wicklow mountains over the weekend.

The female Burmese Python was discovered by a local farmer in the Wicklow Mountains National Park.

He alerted the ISPCA who then rescued the five foot long creature and placed her in the care of a reptile specialist. The snake was underweight, dehydrated, and injured when she was found.

She has since been named 'Sammi.'

ISPCA chief inspector Conor Dowling said that the snake is "hanging in there" but it remains unclear whether she will survive.

"This snake did not make its own way up the Wicklow Mountains and we believe that it was abandoned and left in an environment not suited to an animal of this type," he said.

"We suspect that it had been abandoned some days prior to her discovery but we also have reason to be concerned about the care that it was receiving prior to its release." 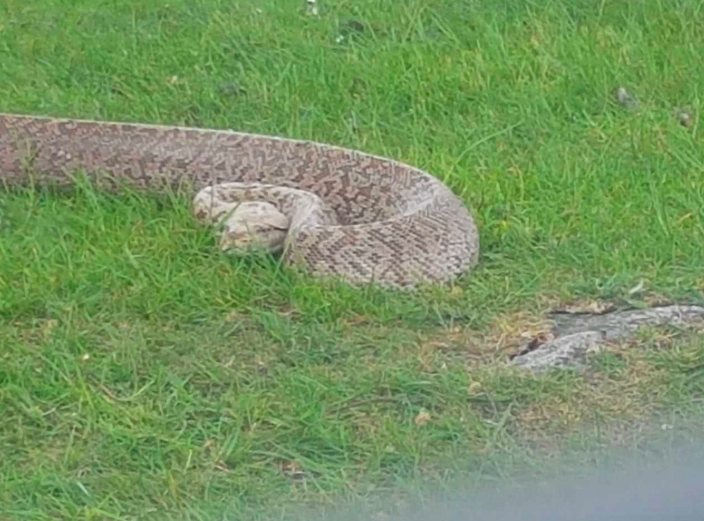 Dowling said that animals like Sammi suffer "slow, lingering deaths" when left to fend for themselves in Irish climates.

He said that Burmese Pythons have specialised environmental requirements needed to survive.

"During the exceptional summer last year, the ISPCA rescued two snakes which were active due to the warm weather," he said.

"It raises the question how many animals of this type are out there dying slowly after being discarded by irresponsible owners that no longer want them."

Dowling said that the ISPCA would like to see breeding and selling regulations put in place when it comes to exotic pets.

Anybody with any information about Sammi the snake is asked to contact the ISPCA National Animal Cruelty Helpline on 1890 515 515 or email helpline@ispca.ie in confidence.

popular
Love Island: Mollie's family issue apology following allergy comments
Love Islanders will decide whether to recouple in Casa Amor TONIGHT
Love Island fans think someone has left after Luca arrives back to empty bed
Penneys has a perfect dupe for Charlotte Tilbury's Flawless Filter foundation
Friends creator says they regret not using correct pronouns on the show
Sunny weather set to return tomorrow with highs of 23 degrees
Airport outfits are all the rage as we head abroad - here are the 4 best ones
You may also like
2 months ago
Parent group "appalled" by exclusion of "same sex friendships" and contraception from education at Wicklow school
2 months ago
Mum of two who died in Wicklow swimming accident named locally as school teacher
2 months ago
Woman in her 50s dies and two injured after swimming incident in Wicklow
4 months ago
Body found in search for missing 82-year-old woman in Wicklow
6 months ago
Man in his 30s dies after bus collision in Wicklow
8 months ago
Buying a home in Dublin, Meath, Kildare or Wicklow? Don't miss this free virtual mortgage advice event
Next Page