Most celebrities like to keep the public guessing as to who they’re dating or whether they’re engaged but this week Aaron Carter (talk about a blast from the past) openly revealed that he still has feelings for his ex Hilary Duff.

The pop star took to Twitter last night to pretty much declare his love for his former flame. He started off by retweeting a picture of Hilary which was captioned “hilary duff is flawless [sic]” before adding a few cryptic tweets.

Don't be that stupid douche that loses the love of your life forever.. Like me...

I'll spend the rest of my life trying to better myself to get back to her. I don't care what ANY of you think.

END_OF_DOCUMENT_TOKEN_TO_BE_REPLACED

It wasn’t long before one of his fans asked him if he was talking about the recently-single Lizzie McGuire star to which he replied “Sure am.”

Just in case you didn’t know, Aaron and Hilary started dating back in 2001 when they were in their teens but broke things off two years later amid rumours he had cheated on her with none other than Lindsay Lohan (hence the reason they are said to be rivals). 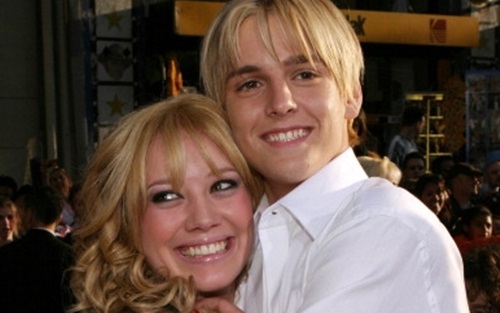 Aaron and Hilary dated on and off for two years when they were teenagers.

While Hilary is yet to respond to the public declaration (which took some courage), a reunion may well be on the horizon as she is currently single having split from husband Mike Comrie, with whom she has a two-year-old son, back in January.