The comedian and actor gave birth to a baby boy yesterday just a few hours before Meghan Markle welcomed her own first child.

Similar enough to Meghan, thousands of loyal fans flocked to the street side near where Amy had given birth, desperately hoping for a glimpse of the baby, or for Chris as he addressed the world media.

Or rather, none of those things happened and Amy was allowed to have a normal enough birth all to herself.

Amy shared the above photo to mark the birth of her son. She wrote: "10.55pm last night. Our royal baby was born."

Just before that she had shared a photo of her "Met look for this year" as she posed on the iconic steps on the way to the hospital while wearing some leggings, a grey top, and a cardigan. 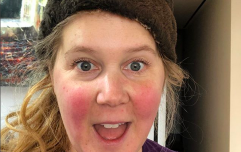 END_OF_DOCUMENT_TOKEN_TO_BE_REPLACED

Amy informed her fans that she was having a boy over the weekend following a long post about food. Not dissimilar to the way she announced her pregnancy, she added: "Also we are having a boy" to the end of the post, allowing only the most dedicated of fans in on her secret.

Or, anyone who Googled 'Amy Schumer' during that time.

Oh yeah does it feel to everyone like I’ve been pregnant for a long time? It must be getting annoying to you all that I’m still pregnant Well imagine how I feel mother fuckers!!!!!! #soblessed #hatemondaysloveweekendstho

Amy suffered from severe hyperemesis during her pregnancy leading to her having to cancel many shows during her third trimester.

The comedian was hospitalised on more than one occasion and frequently joked about the sheer amount that she was puking.

She and husband Chris married in February of last year in a secret ceremony in Malibu.

They had been together for just four months.

popular
Paul Mescal wore O'Neill's shorts while carrying cans of pink gin so I bought O'Neill's shorts and cans of pink gin
Women and girls struggling with access to period products during #Covid-19, research shows
This amazing hanging egg chair is coming into Aldi next week and go, go go (but safely)!
After days of silence, Scott and Sofia finally comment on the break up rumours
5 reasons why we need more videos of Doireann Garrihy's new puppy immediately
So, William and Harry have a step sister... and who knew?
Her Quarantine Quiz Week 9: Iconic Irish music videos
You may also like
4 months ago
Amy Schumer starts IVF journey and her emotional Instagram post will resonate with so many people
1 year ago
Amy Schumer announces her newborn son's name - and it is pretty unusual
1 year ago
'#DidntPuke' Amy Schumer's latest pregnancy selfie is a triumph
1 year ago
Amy Schumer just demonstrated how to put on socks while pregnant, and we're LAUGHING
1 year ago
Amy Schumer reveals that her husband Chris Fischer has autism spectrum disorder
1 year ago
Amy Schumer's sister-in-law made her a vagina birthing cake and eh, yeah OK
Next Page