Britney Spears' boyfriend thanks fans for support after release of documentary

"I have always wanted nothing but the best for my better half, and will continue to support her following her dreams and creating the future she wants and deserves."

This week has been all about Britney Spears and rightly so.

This week, the New York Times released its documentary about Britney entitled Framing Britney Spears, which hit headlines all over the world this week. 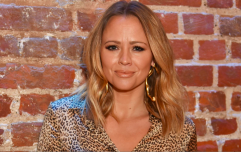 END_OF_DOCUMENT_TOKEN_TO_BE_REPLACED

The NYT piece looks into the star's rise and fall and subsequent life of conservatorship. The documentary goes into detail about aspects of Britney's life including her relationships, the never ending swarm of paparazzi, the media's control on her life and the #FreeBritney movement.

Now Britney's boyfriend since 2016 Sam Asghari has broken his silence about the documentary.

Sam Asghari told PEOPLE magazine this week: "I have always wanted nothing but the best for my better half, and will continue to support her following her dreams and creating the future she wants and deserves."

"I am thankful for all of the love and support she is receiving from her fans all over the world, and I am looking forward to a normal, amazing future together."

END_OF_DOCUMENT_TOKEN_TO_BE_REPLACED

Britney has yet to comment on the documentary, but she did post a video on Instagram last night hinting at the fact that she knows something is going on.

The singer says in the video, which was just released after her documentary, "The moment we've all been waiting for last week" she pauses and then says "the Super Bowl!" The pause in the video says it all, really.

Or maybe she was just super excited for the Super Bowl on Sunday. Who can say for sure?

Girls With Goals || Her · Ep.160: The Beauty Of Coaching - Hayley Harrison joins us from Sport Ireland
popular
Regé-Jean Page arrives in Ireland to shoot new movie
Hairdressers will be "prioritised" in reopening plan for May
The Handmaid's Tale season 4 confirmed for RTÉ2 this May
Minister Simon Harris says €9 substantial meal rule was "a bit of a mockery"
Storm Lola to bring high temperatures to Ireland, says Met Éireann
"I didn't sell anything" Pete Bennett defends sharing Nikki Grahame's last text to him before her passing
Lizzo's nude - and unedited - selfie is so important
You may also like
6 days ago
Imelda May to make acting debut in British comedy
6 days ago
Yvonne Connolly: "All that was going through my mind was that I could have died"
1 week ago
Wifey Material: Rihanna just dropped a bridal lingerie collection
1 week ago
Unearthed photo shows Prince Philip giving off real Prince Harry vibes at 36
1 week ago
Instagram v reality: Why are we so fascinated by "normal" photos of celebrities?
1 week ago
Jennifer Aniston reportedly adopting a baby girl
Next Page