The star revealed she was pregnant with her third child earlier this month.

Britney Spears has announced she will be taking a break from social media.

In an Instagram post on Sunday night, the singer said she will be stepping back "for a little while". 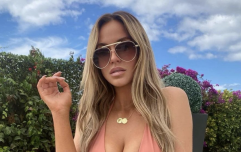 END_OF_DOCUMENT_TOKEN_TO_BE_REPLACED

"I'm going on a social media hiatus for a little while !!!" she told her 48 million followers. "I send my love and God bless you all."

The 40-year-old shared a a video of a baby lounging in a chair wearing heart-shaped sunglasses, a fluffy robe, and pink hair rollers along with the message.

It comes as she recently confirmed she is expecting a child with partner Sam Asghari, but added that she won't be going out in public much during her pregnancy because of the paparazzi.

"I lost so much weight to go on my Maui trip only to gain it back," she said at the time. "So I got a pregnancy test… and uhhhhh well… I am having a baby… 4 days later I got a little more food pregnant.

END_OF_DOCUMENT_TOKEN_TO_BE_REPLACED

"I obviously won’t be going out as much due to the paps getting their money  shot of me like they unfortunately already have..."

Britney previously said she had wanted to start a family with Sam for some time, but was not allowed to remove her IUD birth control device during her 13-year conservatorship.

Thankfully, the end of the conservatorship in November 2021 saw Britney gain her reproductive autonomy back. She announced her engagement to Sam just one month before it officially ended.

While announcing her new pregnancy, she also opened up about suffering with perinatal depression with her first two pregnancies – and feeling like it was something she needed to keep secret and not talk about for fear of being deemed a bad or unfit mother.

Britney is already a mum to 16-year-old Sean and 15-year-old Jason, who she shares with ex-boyfriend Kevin Federline.

popular
Bride asks for divorce day after wedding following groom's disrespectful cake stunt
These are the most popular names for babies born in February
Gwen Stefani reportedly pregnant with baby number four
Natalie Imbruglia's Torn is actually a cover and the original just isn't the same
The Greatest Showman is becoming a Broadway musical and we need a second
'He's a changed man': Woman marries her 'high school bully'
Here's why Nicola Peltz-Beckham's family are suing her wedding planners
You may also like
2 weeks ago
Are we getting any closer to freeing the nipple?
3 months ago
Instagram 'looking into' sudden suspension of thousands of accounts
3 months ago
Experts reveal how often you should actually wash your hair
8 months ago
Roz Purcell wants people to stop asking when she’s going to have kids
9 months ago
Liam Payne finally explains weird accent during hilarious Oscars interview
10 months ago
Facebook and Instagram down amid social media outages
Next Page