BURN! Kanye West Says He Had To Take 'Thirty Showers' Before Sleeping With Kim

Kanye West isn't known for watching his words but he's reached a whole new level with his latest interview.

The rapper's ex-girlfriend Amber Rose has been involved in a weeklong feud with the Kardashians, calling Kim Kardashian a "whore" during a war of word on Twitter with sister Khloe.

However, West was not taking the slur lying down and hit out at the model during an interview on Power 105.1's The Breakfast Club this morning, saying that he had to take a copious amount of showers before Kim would sleep with him due to his relationship with Rose. 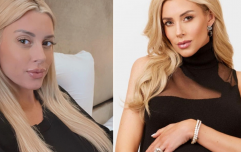 END_OF_DOCUMENT_TOKEN_TO_BE_REPLACED

"If Kim had dated me when I first wanted to be with her, there wouldn’t be an Amber Rose. It's very hard for a woman to wanna be with someone that's with Amber Rose. I had to take thirty showers before I got with Kim," he said.

The Black Skinhead star went on to seemingly confirm 17-year-old Kylie Jenner's relationship with rapper Tyga, despite adding that he "can't speak on nobodies relationship".

"I think he got in early, I think he was smart. They are closer in age than a lot of relationships that I know. I knew Tyga was smart."

popular
Bride asks for divorce day after wedding following groom's disrespectful cake stunt
Gwen Stefani reportedly pregnant with baby number four
Here's why Nicola Peltz-Beckham's family are suing her wedding planners
Police believe they know what happened to missing dog walker Nicola Bulley
Why Are Men so Obsessed With Boobs? The Answer is Pretty Surprising...
Woman who earns more than boyfriend 'gets the ick' because she has to pay for everything
Molly Mae fans are shocked after finding out how much Bambi's crib cost
You may also like
2 weeks ago
Stacey Solomon says she might give birth in a few days
1 month ago
Ferne McCann shares update on "difficult" time following voice note scandal
1 month ago
Glee star Ali Stroker welcomes baby boy
2 months ago
TOWIE's Billie Faiers welcomes baby girl
2 months ago
Pete Davidson and Emily Ratajkowski snapped together in public amid dating rumours
2 months ago
Love Island's Chloe and Millie have moved in together after splitting from Toby and Liam
Next Page