Congratulations are in order!

Glee’s Darren Criss and his girlfriend Mia Swier are engaged.

The couple have been together for seven and a half years.

The 30-year-old actor confirmed the news on social media on Friday night with a sweet announcement.

“Mia and I have had seven and a half years of fun, wacky, wonderful, CRAZY adventures together.

“And I’m happy to announce that we’re kicking those adventures up a notch.

“We’re goin for it. To boldly go where neither of us have gone before. Engage.”

The musician and his fiancée were quickly flooded with well wishes by fans.

And while they've kept their relationship largely private over the years, they've recently been sharing a series of loved-up selfies.

The pair drew some inspiration from Baz Luhrmann's Romeo + Juliet for their costumes last Halloween, with the Glee star sharing photos of them dressed up as the undead versions of the title characters. 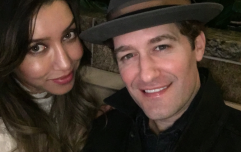 END_OF_DOCUMENT_TOKEN_TO_BE_REPLACED

The couple last hit the red carpet earlier this month for the premiere of his new series, American Crime Story: Assassination of Gianni Versace.

The show is currently airing in the US, and is expected to air in Ireland and the UK sometime early this year.

Girls With Goals || Her · Ep.151: 'A Story Shared' - Aoife P. Rafter on blogging during a pandemic and living with CF
popular
Matthew Perry's dad was a character on Friends and how did we not notice?
New weather warning issued as Storm Christophe passes over Ireland
Joe Exotic has limo waiting as he expects presidential pardon from Donald Trump
INTO asks government to reconsider limited reopening of schools due to "grave safety concerns"
Here's what will happen in Bridgerton season 2 - if Netfix goes by the books
Here's what happens on every day of your menstrual cycle (roughly)
Someone has ranked the penis size of men from all over the world
You may also like
1 year ago
A Glee star has joined the cast of American Horror Story season nine
1 year ago
Glee is arriving on Netflix tomorrow and that's our Sunday sorted
1 year ago
Every episode of GLEE is coming to Netflix in June and it's the news we needed
2 years ago
Glee's Kevin McHale looks TOTALLY different thanks to his intense workout routine
3 years ago
'In a heartbeat'... Lea Michele wants a Glee reboot as soon as possible
3 years ago
Glee's Mark Salling 'attempted suicide' before plea deal in child porn case
Next Page