The couple just moved in together.

Davide and Ekin-Su may have only met this summer, but the Italian businessman has hinted at marrying the Turkish actress.

The Love Island winners recently took a major step in their relationship after moving in together, but Davide already has his eyes set on a wedding.

END_OF_DOCUMENT_TOKEN_TO_BE_REPLACED

The reality stars spoke to OK! about taking the next step and he seems pretty keen on tying the knot.

He told the publication that they don't have any concrete plans but said Ekin-Su is the one for him.

He said, "We’re just enjoying things. We’re very close to each other, we love each other."

Davide said it will "come by itself, probably soon." 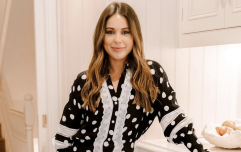 END_OF_DOCUMENT_TOKEN_TO_BE_REPLACED

The pair said their relationship has gone from strength to strength since winning Love Island this summer.

However, they have had their fair share of rows since the show ended. One is featured in their new ITV series.

Davide and Ekin-Su's latest project is due to air at the end of this month.

"You know, me and Ekin-Su together are very entertaining people, we're just being ourselves all over the trip and now when I look back because when I was filming it I was saying maybe we could do better, yes we're being ourselves but it's not g

Ekin-Su and Davide: Homecomings airs at 9 pm on November 28th and 29th on ITV 2.

Read more: Davide Sanclimenti gives the tea on his and Ekin-Su's new show

Ekin-Su says she laughs at Dancing On Ice "curse"

popular
Bride asks for divorce day after wedding following groom's disrespectful cake stunt
Here's why Nicola Peltz-Beckham's family are suing her wedding planners
These are the most popular names for babies born in February
Couple decide to live on cruise ship permanently after finding it's cheaper than paying mortgage
Natalie Imbruglia's Torn is actually a cover and the original just isn't the same
Here Are The Top 20 Most Common Pin Codes in The World
Why Are Men so Obsessed With Boobs? The Answer is Pretty Surprising...
You may also like
5 days ago
Love Island's Haris spills all on an unaired fight between Zara and Tanyel
5 days ago
Wayne Lineker called out for comment on Tommy and Molly-Mae's baby news
5 days ago
Molly-Mae Hague's sister Zoe has just shared the cutest unseen pictures of baby Bambi
6 days ago
Shaughna Phillips issues statement following arrest of boyfriend
6 days ago
Molly Mae has called her daughter after a Disney character
6 days ago
Kate Ferdinand "really grateful" her pregnancy is going well following miscarriage
Next Page