Derek Mooney Speaks Out About His Sexuality For The First Time

Derek Mooney has spoken about his sexuality for the first time.

The RTÉ broadcaster was outed by comedian Des Bishop in 2006 but insisted that he never felt the need to announce his sexuality to the nation.

Speaking to The Irish Sun the presenter said: “Out where? I was never in. I just didn’t talk about my sexuality.

“I’m a guy who presents a radio show and that’s it.

“I feel I shouldn’t have to talk about my private life. It should be about what I do for a living.

“I don’t go around waving any flags. I never did. It’s not part of my agenda.

“I have no agenda. I just get on with my life and do my own thing.” Derek said he always knew he was gay and said being gay in the 1970’s was a lot harder than it is now. 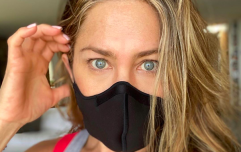 END_OF_DOCUMENT_TOKEN_TO_BE_REPLACED

“I was never straight. But I never felt any different. Why should I feel different? Did I work very hard when I was young? Yes, I did.

“I was working all my spare time so I probably lost out on a lot of friendships. Work became everything and there was no one to meet.

“It’s not like now when kids can be themselves and that’s the most important thing. It was a different country then.

"You were careful and watched what you said to a certain degree, but I didn’t feel different to anyone else,” she said.

Mooney was the best man at his friend Alan Hughes’ wedding to his partner Karl Broderick last year. When asked about the civil partnership legislation that allows for same-sex marriage Mooney said: “I’d consider anything. I’m 45 now so I had better get my skates on, hadn’t I?

“You don’t know what’s going to happen. Nobody hands anything to you.

“If you’re in the right place at the right time and you meet the right person you never know what’s going to happen,” he said.

Derek’s programme on RTÉ Radio One attracts 226,000 listeners every day.

popular
QUIZ: Can you guess the Disney movie from its opening line?
Ghislaine Maxwell, former girlfriend of Jeffrey Epstein, arrested by the FBI
A comprehensive breakdown of the Shane Dawson/Jeffree Star/Tati Westbrook 'Karmageddon' drama
Milkshakes and bacon double cheeseburgers are back at McDonald's next week
"I never thought it would be cancer": Stage 4 melanoma patient recalls receiving her diagnosis
6 steps for treating acne in adulthood, according to a skin therapist
8 out of 10 married couples are owed tax back, are you one of them?
You may also like
1 month ago
Robert Pattinson's photos that he took of himself for GQ Magazine are everything we needed right now
1 month ago
Laura Whitmore says she 'didn't know how to react' after experiencing miscarriage
1 month ago
Mary-Kate Olsen seeks an emergency divorce from Olivier Sarkozy
1 month ago
Duffy felt 'liberated' after sharing kidnapping ordeal, encourages fans to talk
1 month ago
Two of Ireland's Olympic athletes just got engaged and the announcement is the sweetest thing EVER
1 month ago
Actor Jerry Stiller has passed away aged 92, son Ben Stiller confirms
Next Page