Dublin Nail Salon Got A Shout Out From Ellen DeGeneres

Saoirse Ronan was on The Ellen Show as part of her press tour for her movie Brooklyn.

While on the show she mentioned a Dublin nail salon, Tropical Popical, not once but three times. If that wasn't amazing enough, Ellen's show Twitter account gave it an extra mention, poking fun at the amount of times she name checked the salon.

In case you were wondering, Saoirse Ronan gets her nails done at Tropical Popical. https://t.co/JxYsKVpN1T

Saoirse mentioned the salon while telling Ellen about how she was getting her nails done when she got the news about her Golden Globe nomination.

We spoke to Tropical Popical who were delighted with the mention saying, "How absolutely sound of Saoirse it is to give such an amazing shout out on such a global platform to a small business."

They also told us that Saoirse pops in every time she's home and gets her nails done by Chloe.

She even went there before the Dublin Brooklyn premiere to ensure her nails were on point for the event.

Ellen also couldn't resist the chance to poke fun at how people still can't pronounce Saoirse's name. She offered her a gift as a solution to that problem, a massive sign to hang around her neck which read, "Hello. My Name is Sur-Sha". 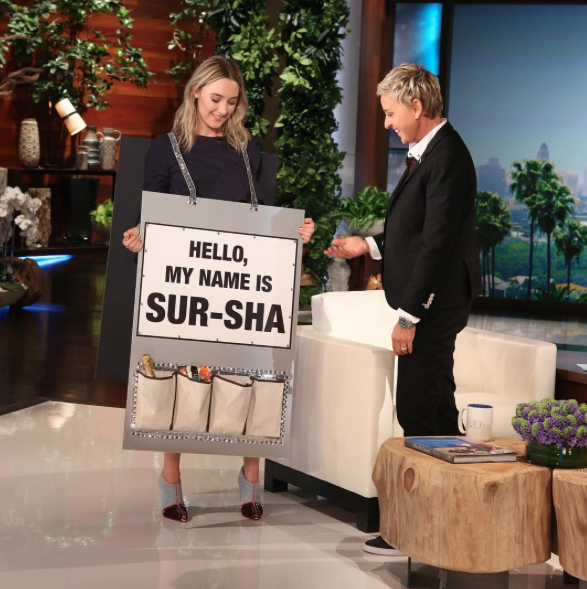 Only in November, Ryan Gosling was presenting Saoirse with the New Hollywood Award at the Hollywood Film Awards and decided to educate the American audience on how to say her name the right way. He said on stage,  "It's Ser-sha, like inertia".

popular
Casper Walsh from Versatile got engaged this weekend, and the ring is INSANE
H&M to close 170 stores this year due to dropping sales
Glossier: A first-time buyers guide to this cult beauty brand
Someone has ranked the penis size of men from all over the world
James Franco Has Opened Up About His Relationship With Lana Del Rey
Glee Star Naya Rivera Faces Backlash After Making ‘Race’ Joke
Here's what happens on every day of your menstrual cycle (roughly)
You may also like
1 week ago
Quarantine Barbie: She exists and she's far too real
2 weeks ago
Here's how to make a vegan 'fried egg', according to an Australian food blogger
2 months ago
Kids have been applying to 'work from home' with their dogs during lockdown and nah, too much
5 months ago
A postpartum ad has been banned from the Oscars this year
5 months ago
The internet is bursting with beautiful tributes to #girldads and it's all thanks to Kobe Bryant
5 months ago
Mrs Hinch just shared the super-clever way she cleans her beauty blender (and we are impressed)
Next Page