''Dory ends up at the Marine Life Institute behind a large wall...”

Ellen DeGeneres always has a perfect way of making an important point.

At the moment, many celebrities are using their voices to protest Donald Trump's ban on Muslims. 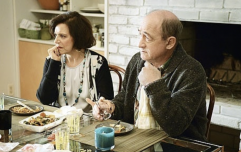 END_OF_DOCUMENT_TOKEN_TO_BE_REPLACED

Some are doing it by speaking out on Twitter, others are joining marches and then there's Ellen, who uses Dory.

On her show, the host briefly explained Trump's Muslim ban before claiming,''I don’t get political, so I’m not going to talk about the travel ban,” and continued, “I’m just gonna talk about the very non-political, family-friendly, People’s Choice Award-winning Finding Dory.”

Ellen then uses the plot of the very sweet film to simply describe why the ban is wrong.

“And these are her parent's  and they live in America. I don’t know what religion they are, but her dad sounds a little Jewish. It doesn’t matter,” she quips.

When Dory ends up in America, ''she ends up at the Marine Life Institute behind a large wall.”

“They all have to get over the wall, and you won’t believe it, but that wall has almost no effect in keeping them out,” Ellen adds to an applauding audience.

Then comes the most important part of the Finding Dory narrative.

They help her even though they’re completely different colours, because that’s what you do when you see someone in need — you help them. That is what I hope everyone who is watching ‘Finding Dory‘ has learned.”

We're not sure how to feel about the fact that a cartoon is more logical than the man running the United States of America.

popular
Women are rinsing their hair in apple cider vinegar – and the results are amazing
YouTube star Melanie Ham dies after cancer battle aged 36
New photo of Bernadette Connolly released as investigation continues
Damian Lewis pays touching tribute to late wife Helen McCrory with Irish poem
"Hair contouring" is about to be huge, here's everything you need to know
Toddler dies after being struck by vehicle in Co. Cork
Worried about a loved one? Here are 5 signs of suicide to look out for
You may also like
4 hours ago
46 children suffered "significant harm" in Kerry mental health service
5 hours ago
Teen hospitalised with "apparent stab wounds" after incident in Cork
9 hours ago
Toddler dies after being struck by vehicle in Co. Cork
1 day ago
Several people killed after crush at Africa Cup of Nations match
1 day ago
Met police apologise for "sexist, derogatory" language used in strip-search
1 day ago
Jenny McCarthy shares update ahead of brain tumour surgery
Next Page