Shane Richie and Jessie Wallace were in town to promote their new play and I was lucky enough to sit down to chat with them.

Best known for playing Alfie Moon and Kat Slater in EastEnders, the duo take to the stage for the first time together in a month. You'll be able to see them in The Perfect Murder, which comes to The Bord Gáis Energy Theatre in February.

Based on the book by the same name, by author Peter James, The Perfect Murder is about a married couple, Victor (Shane) and Joan (Jessie). When their marriage reaches crisis point Victor decides the only way to get rid of Joan is by committing the perfect murder.

END_OF_DOCUMENT_TOKEN_TO_BE_REPLACED

Speaking about their onscreen chemistry, Jessie said, "We work so well together, and if it works, then why break it up? So that's why we do it."

In comparison to their characters in the play, Shane added: "These two people are so different to Kat and Alfie. She (Jessie) has created this character in this show which is so lovely but it's a decent into madness the whole thing and at the moment we still have two more weeks of rehearsals and we're still finding stuff." 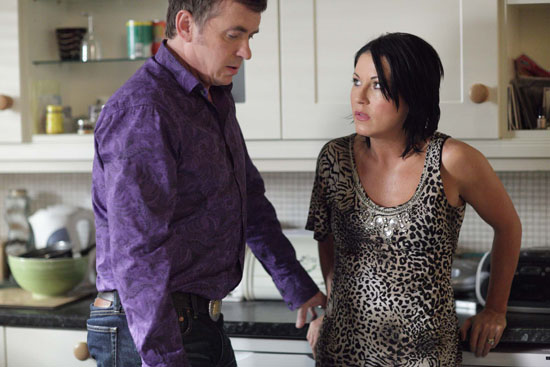 Jessie commented on Shane's character and the play: "There's a very menacing side to Victor which I've never seen you (Shane) play before. There's a lot of colour to it and it's really scary and very jumpy and then in the next breath it's funny. So it's a really dark comedy."

When asked about whether or not people will be able to separate Kat and Alfie from these new characters Jessie said, "I don't think they will. But one time I was doing a play and right at the end of it I was kissing my husband in the play, and someone screamed out, 'what would Alfie say?'"

She continued: "When you are in a soap, in people's living rooms four days a week, you are that character. Even when I left and wasn't in EastEnders for five years, I still was Kat. When I'm fifty, I'll always be Kat. You can't get away from it."

Shane added, "You either diss it or you embrace it. You think, hold on there are a load of actors who would love to have the opportunity that we've had. Over 14 years of Kat and Alfie, we feel like we've created something that people can relate to."

END_OF_DOCUMENT_TOKEN_TO_BE_REPLACED

News broke recently that they would be coming to Ireland to film a 6 part drama spin-off from EastEnders. In the popular soap, Kat finds out that she has a second child, a twin to her daughter. The show will follow her journey to Ireland in search of her long lost son.

Speaking about the drama Shane said, "We get plonked in this village, where there are all these stories going on, that we become in-brawled in. So it's all Irish cast, all Irish crew. We're really excited by it. We will be here for four months and we can't wait."

The casting for the series is currently underway so the two couldn't confirm who would play the role of Kat's son. They confirmed that they will be in Dublin for some of the filming.

popular
Strictly's Giovanni Pernice responds to dating rumours following split from Maura Higgins
The internet is saying the same thing after Ryan's Toy Show opening
Vicky Phelan says terminally ill people should have right to decide how to die
You can rent out the house from House of Gucci on Airbnb
We finally know what happened to Sam in And Just Like That
The best memes from this year's Late Late Toy Show
8 of the hottest make-up trends to try this festive season
You may also like
4 days ago
Bake Off fans in tears after emotional final show
5 days ago
WATCH: The trailer for Netflix's Anna Delvey series is finally here
5 days ago
Everything we know about Selling Sunset spin-off, Selling Tampa
1 week ago
I'm a Celeb trials set to be different this year, producers say
1 week ago
Vogue Williams to host new body image show Send Nudes
1 week ago
Bake Off fans heartbroken after fan favourite leaves the tent
Next Page