Glenda Gilson has announced the birth of her second child, a baby boy named Danny.

The presenter announced the happy news on her Instagram account last night, confirming that she and husband Rob McNaughton welcomed their second son in Dublin's Coombe hospital.

"Welcome to the world little man!" she said. "Danny Mac arrived early this morning, safe & well and made sure he didn’t steal his big brothers birthday."

Already parents to son Bobby, Glenda and Rob announced that they were expecting their second child earlier this year.

In the lead up to the birth, the TV presenter shared a series of photos of Bobby helping her pack for the hospital, clearly eager to become a big brother for the first time.

Glenda and Rob married in August 2014. The pair first met when they were teenagers and later started dating in their 20s. They eventually tied the knot in the lavish Trump International Golf Links & Hotel in Doonbeg. 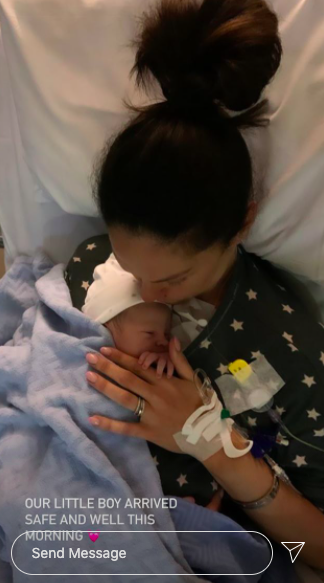 The couple welcomed their first child, Bobby, in October 2018.

Girls With Goals || Her · Ep.151: 'A Story Shared' - Aoife P. Rafter on blogging during a pandemic and living with CF
popular
"I don’t know where I’d be without her:" Paul Mescal chats new girlfriend in candid new interview
Zoe Alexander Says X Factor Made Her Look Like a 'Fool'
Ex-housemate has no sympathy for I'm A Celeb's Jordan North - because he let her gerbil die
QUIZ: Can you guess the TV show from the kitchen?
New image based sexual abuse laws to carry prison sentence of up to seven years
Jade Thirlwall: "Little Mix will literally never die"
Singing crowds gather on Grafton Street amid Level 5 restrictions
You may also like
3 days ago
Jade Thirlwall: "Little Mix will literally never die"
5 days ago
Emily Blunt: "[Jamie Dornan] assured me that I sounded Irish and I'm going to believe him"
5 days ago
Scott Disick and model Amelia Hamlin confirm relationship on beach stroll
1 week ago
Billy Connolly special to celebrate comedian's life as he steps back from stand up
1 week ago
Johnny Depp supporters petition for Amber Heard to be dropped from Aquaman 2
1 week ago
Andrea Bocelli among guests for this week's Late Late Show
Next Page