Jacqueline Jossa and Dan Osborne have reportedly welcomed their second child together.

According to The Sun, the pair became the proud parents of a baby girl on June 25 - one day after their second wedding anniversary.

No other details about the couple's newest arrival are currently available.

The former EastEnders actress announced her pregnancy in OK Magazine earlier this year, admitting it had been a "huge shock" for both of them.

She told the publication:

"We both started laughing when the test was positive. We took two more just to be sure!"

The couple are already parents to three-year-old Ella Selina. 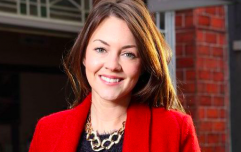 END_OF_DOCUMENT_TOKEN_TO_BE_REPLACED

Meanwhile, the fitness guru also has a son named Teddy, 4, from a previous relationship.

The pair first started dating in 2014, before tying the knot in a lavish ceremony at Delamere Manor in Cheshire.

The fairytale ceremony took place in front of many of their friends and family on the luxurious 100-acre £7million property.

They are said to have split earlier this year, with Osborne recently moving back into the family home to help care for the newest addition.

“We’ve been through a rough period but right now we’re getting on well.

"Neither of us knows what’s going on at the moment but we’re spending time together and seeing how things go.

"Dan hasn’t moved back in, but we’re seeing what happens.

"He’s here a lot helping with Ella and he’ll be hands on when the baby arrives.

"We’re getting on at the moment and that’s the most important thing to us."

Girls With Goals || Her · Ep.151: 'A Story Shared' - Aoife P. Rafter on blogging during a pandemic and living with CF
popular
David Attenborough quits Instagram just two months after joining
Rosanna Davison brings her twin boys home to meet their big sister
Ryan Tubridy announces this year's Late Late Toy Show theme
QUIZ: Can you guess the TV show from the kitchen?
Police investigating I'm A Celeb over fears non-native creatures are escaping
Princess Diana's brother isn't happy with The Crown's depiction of his sister's marriage
AOC weighs in on Harry Styles' Vogue cover, says he looks "bomb"
You may also like
6 months ago
EastEnders 'to start filming again by the end of June'
8 months ago
EastEnders shuts down filming amid coronavirus outbreak
8 months ago
Apparently, Emmerdale is the most stressful soap for fans to watch
9 months ago
EastEnders have 'revealed' Bex Fowler's exit storyline
9 months ago
EastEnders' Patsy Palmer to 'return' as Bianca Jackson
9 months ago
EastEnders has confirmed who died in the boat crash
Next Page