Lady Gaga has revealed how she was raped as a teenager by a man 20 years her senior, during a radio interview.

While appearing as a guest on The Howard Stern Show, the Born This Way singer admitted she “went through some horrific things” and sought mental and physical therapy to help her through the ordeal. 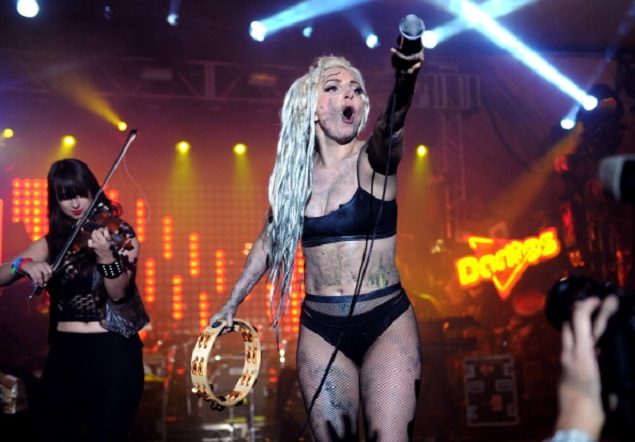 END_OF_DOCUMENT_TOKEN_TO_BE_REPLACED

After explaining she wrote the song ‘Swine’ about the degrading of women through rape, presenter Stern pressed the singer asking:

"You keep alluding to...were you raped by a record producer?"

Although first wishing not to talk about the incident, when pressed, the 28-year old said:

“I went through some horrific things that I'm able to laugh [at] now, because I've gone through a lot of mental and physical therapy and emotional therapy to heal over the years.

“My music's been wonderful for me. But, you know, I was a shell of my former self at one point. I was not myself.

'To be fair, I was about 19. I went to Catholic school and then all this crazy stuff happened, and I was going, "Oh, is this just the way adults are?'...I was very naive.’”

END_OF_DOCUMENT_TOKEN_TO_BE_REPLACED

Gaga also revealed how she has not confronted her rapist since the attack, saying:

“I think it would terrify me. It would paralyse me. I saw him one time in a store and I was so paralysed by fear. Because it wasn't until I was a little bit older that I went, "Wow, that was really messed up."'

The singer, whose real name is Stefani Germanotta, continued:

"It happens every day, and it's really scary, and it's sad. It didn't affect me as much right after as it did about four or five years later.

"It hit me so hard. I was so traumatized by it that I was like, 'Just keep going.' Because I just had to get out of there."

END_OF_DOCUMENT_TOKEN_TO_BE_REPLACED

The star has said she has since received treatment for the attack, and is determined to not let it affect her work:

"I don't want to be defined by it. I'll be damned if somebody's gonna say that every creatively intelligent thing that I ever did is all boiled down to one d*ckhead who did that to me.”

popular
Squid Game fans spot massive clue in Tug of War game
The First Quadrillionaire? Paypal Accidentally Gives Man $92 Quadrillion
Woman Hits Out After Being Called 'Ugliest Bride Ever' On Her Wedding Photographer's Facebook Page
Someone has ranked the penis size of men from all over the world
Here Are The Top 20 Most Common Pin Codes in The World
Lidl closing early this weekend to thank staff for hard work
Tributes paid to Limerick based blogger and model Patrick McLoughney
You may also like
2 years ago
Turns out, this colour of wine gives you the WORST hangover
5 years ago
Gwen Stefani Receives Massive Backlash After "Insulting" April Fools' Prank
5 years ago
Katie Price Names And Shames The Twitter Trolls Bullying Her Son Harvey
5 years ago
Kim Kardashian Blasts "Body-Shaming and Slut-Shaming" In Brilliantly Honest Post
5 years ago
WATCH: Emma Watson Launched HeForShe Arts Week On International Women’s Day
5 years ago
Kylie Minogue Just Served Kylie Jenner With Some Scathing Home Truths
Next Page