James Corden has just been announced as the host of this year's Tony Awards.

The awards, which recognise talent in live Broadway theatre, will be hosted by Corden at the Beacon Theatre in New York City, on Sunday, June 12th.

He's no stranger to Broadway having performed in One Man, Two Guvnors, where he won the 2012 Tony for Best Leading Actor in a Play. He also appeared in the Tony-winning play The History Boys. 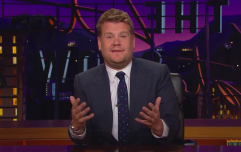 END_OF_DOCUMENT_TOKEN_TO_BE_REPLACED

Corden issued a statement about being asked to host saying, "I'm absolutely thrilled to be hosting the Tony Awards. Both times I've worked on Broadway have been amongst the happiest times of my professional life. I consider it a huge honour to be asked to host such an incredible night. It's gonna be fun, I can't wait to dust off my tap shoes!"

Charlotte St. Martin, President of The Broadway League, and Heather Hitchens, President of the American Theatre Wing, released this statement about James:

"James is one of those rare performers whose gifts translate perfectly to both the Broadway stage and the television screen, making him the ideal choice to host the Tony Awards. The last time he was at the Tonys, he went home with one.  We think he'll have even more fun as host.  This is going to be one unforgettable show."

popular
Irish girls name was the most used Irish name in the United States last year
Love Island fans react to "confusing" recoupling
Love Island fans are scratching their heads after finding Tasha's maternity photoshoot
Here Are The Top 20 Most Common Pin Codes in The World
Two dumped islanders have confessed their feelings for each other since leaving the villa
This €5 Boots serum keeps selling out after skincare fans claim it 'beat all the others'
Princess Charlotte is the most valuable member of the Royal Family
You may also like
7 months ago
Petition to keep James Corden from starring in new Wicked film hits 25,000 signatures
1 year ago
WATCH: The Friends cast do James Corden's Carpool Karaoke - with a twist
1 year ago
Prince Harry is going to be on Carpool Karaoke soon, apparently
2 years ago
'This looks bad' James Corden comes clean on Carpool Karaoke controversy
2 years ago
'It's just bullying': James Corden responds to TV host's fast-shaming comments
3 years ago
The trailer for the new season of Carpool Karaoke is out and OMG, so good
Next Page