Justin Bieber has confirmed that he has married Hailey Baldwin as he shared a belated Thanksgiving post with fans.

The pair were thought to have tied the knot two months ago in New York City, although Hailey denied it at the time.

However, she appeared to confirm their happy news last weekend, after eagle-eyed fans noticed she had changed her name on Instagram.

But now Justin has spoken about the news for the first time, as he shared a heartfelt post about his "first Thanksgiving as a married man."

"Happy late thanksgiving to everyone.

"First thanksgiving as a married man, first time hosting thanksgiving. First time both sides of the family has come together.

"Relationships are hard and love isn’t always easy but thank you Jesus for showing me how!

"Every day is a learning process, trying to be more like him, patient, kind, selfless, boy I got a long way!" 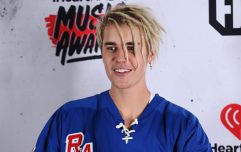 END_OF_DOCUMENT_TOKEN_TO_BE_REPLACED

The pair announced their engagement in the early weeks of this summer, after just a few weeks of dating.

In September, they sparked speculation that they had tied the knot after they were spotted picking up their marriage license and heading into a New York City court house on the same day.

Girls With Goals || Her · Ep.153: Scholarship Squad - We chat to Facebook's Claire O'Hara about our Smurfit Scholarship fund.
popular
Matthew Perry's dad was a character on Friends and how did we not notice?
Irish people urged to send a hug to loved ones on National Hugging Day in aid of Ronald McDonald House
Robbie Williams "fairly sick" with Covid while holidaying in Caribbean
Gwyneth Paltrow's vagina candle "explodes" in woman’s living room causing fire
Gilmore Girls star says he didn't storm the Capitol, praises those who did
Here's what happens on every day of your menstrual cycle (roughly)
Josepha Madigan compares issues around schools reopening to Mother and Baby Homes
You may also like
1 year ago
Justin Bieber takes to social media to tell followers of his Lyme disease diagnosis
1 year ago
Hailey Bieber opens up about social media cruelty in emotional Instagram post
1 year ago
LISTEN: Justin Bieber drops first new solo music in five years - and it's Yummy
1 year ago
Justin Bieber drops trailer for new docuseries that will show a 'full circle' look at his life
1 year ago
WATCH: Kylie Jenner performed Rise and Shine at a charity event with Justin Bieber
1 year ago
Hailey Bieber addresses pregnancy rumours after Thanksgiving photo sent fans wild
Next Page