Fans thought it was hilarious.

Katy Perry and Orlando Bloom have been the ultimate on-again-off-again couple for the last two years.

While the pair were first spotted in January 2016, they announced in March last year that they were going their separate ways.

In the slightly-over-12-months that followed, the are-they-or-aren't-they pair have continued to tease their relationship.

From being captured on holiday in the Maldives together to repeatedly commenting on each other’s social media posts, we don’t know where the pair stand when it comes to their relationship status.

But Katy appears to have confirmed things may be back 'on' again after leaving a seriously NSFW comment on Orlando's social media.

It all began when Orlando shared a promo video for his upcoming new theatre show, Killer Joe, on Instagram.

Many fans began to talk about how excited they were to see the production in the comments.

And then Katy Perry joined in. Well, kinda.

She paid him a compliment, at least. And appeared to confirm that the former couple were probably, most-likely back together. 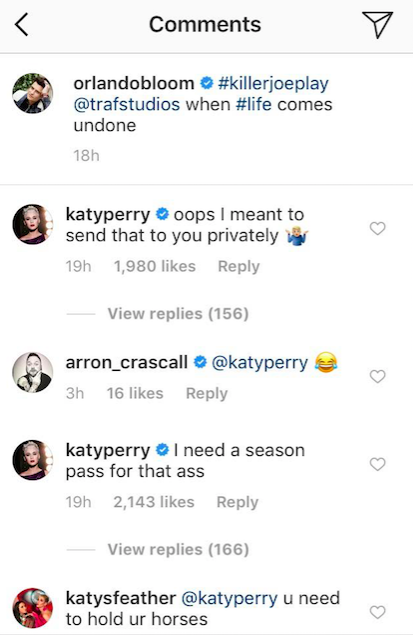 She wrote: "I need a season pass for that ass."

After many people began to pick up on her comment, Katy owned up to her "mistake".

Alongside a shrugging emoji, she added:

"Oops, I meant to send that to you privately."

Fans were in stitches over Katy's social media 'faux pas', while others reckoned this proved the pair were certainly back together.