It's quite a NSFW tune.

After much anticipation, Liam Payne finally released a teaser of his debut solo track. 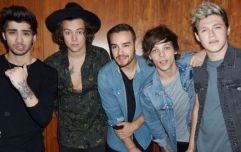 END_OF_DOCUMENT_TOKEN_TO_BE_REPLACED

Liam Payne took to Instagram to tease his new song and it is not what we were expecting. The sultry song couldn't be further from Niall's guitar ballad.

With Liam now in a high-profile relationship with Cheryl Cole, fans were expecting a song about her or along the theme of love, and they were half-right. The song, from the small snippet he shared is all about lust.

The untitled song features song x-rated lyrics, such as:

'I wanna make love to you, be onto you, so hard for you.'

Fans obviously exploded with excitement with over twenty-five thousand comments on the post.

Liam shared a tweet stating he may not even release the song, but fans were still glad to get a taste of his new material.

Girls With Goals || Her · Ep.151: 'A Story Shared' - Aoife P. Rafter on blogging during a pandemic and living with CF
popular
The son in The Undoing is the real life child of Corrie star Katy Cavanagh
'I loved it': The childhood drug addiction that inspired The Queen's Gambit
Met Éireann issue "severe" 55-hour weather advisory
24 hour Penneys: Here's what you need to know about the store's reopening
Barack Obama says he "screwed up" not giving Dolly Parton a Presidential Medal of Freedom
Rosanna Davison: "It feels like the biggest miracle after our fertility struggles"
This is how you can protect your Instagram account from that Ray-Ban scam
You may also like
4 months ago
A definitive ranking of One Direction’s 10 best singles
4 months ago
RANKED: Top 10 One Direction songs of all time (controversial)
10 months ago
Harry Styles apparently now making six times more than his One Direction bandmates
11 months ago
Liam Payne says One Direction might get back together in two years, maybe
1 year ago
One Direction's Louis Tomlinson is embarking on his first ever solo tour
1 year ago
'If it happens...' Harry Styles isn't ruling out a One Direction reunion
Next Page