Her one word comment pretty much sums it up.

At the beginning of the year, Lindsay Lohan said she really wanted to play Ariel in a Little Mermaid remake.

In January the actress told Variety: "The Little Mermaid is my favourite movie since I was a kid.

"Whenever I put that movie on, it makes me happy. I'm like, 'Everybody, stop. Watch this movie.' I'm going to harass my agent about it after this."

It was then announced that The Hollywood Bowl would be putting on a live production of the classic Disney movie to honour of its 30th anniversary this year.

Whether she harassed her agent or not, Lindsay wasn't cast as Ariel - or any character - and instead, Lea Michele was.

Lindsay clearly wasn't impressed by the snub, and her simple reaction was actually pretty brilliant.

As Comments By Celebs on Instagram noticed, Lindsay commented on an page called @thedisneyprincesses. The picture they shared was of the original Ariel and Lea Michele.

It's okay Linds, you'll get em next time. #CommentsByCelebs 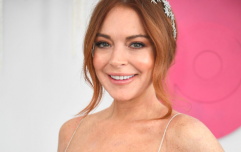 END_OF_DOCUMENT_TOKEN_TO_BE_REPLACED

Linds commented, "Huh?" and we're laughing at the sass (and utter confusion).

The show will take place on May 17 and 18 in Los Angeles, and according to People, The Hollywood Bowl is going to transform into a Fish Bowl Dive-In Theater, meaning it really will be ~*under the sea*~.

Now, if only we had the money to be flying over to LA to see it...

popular
I'm A Celebrity, Get Me Out Of Here moves to ruined castle in UK this year
Daisy Coleman from Netflix's Audrie & Daisy has died, aged 23
Rupert Young, twin brother of Will Young, passes away, aged 41
WATCH: Paul Mescal stars in new Rolling Stones' music video 'Scarlet'
WATCH: Sneak peak of Paul Mescal in latest Rolling Stones' music video
Staycation: TripAdvisor reveals the top 10 hotels in Ireland for 2020
Dirty Dancing the sequel is officially in the works and Jennifer Grey is starring
You may also like
1 year ago
Lindsay Lohan's Mykonos beach club has closed with no renewal for MTV series
1 year ago
Paris Hilton just majorly trash talked Lindsey Lohan, and she did NOT hold back
1 year ago
So fetch! There was a Mean Girls reunion this week and fans are so excited
1 year ago
Lindsay Lohan appears to get slapped after trying to take kids away from their parents on Instagram Live
2 years ago
7 things we know about Lindsay Lohan's new MTV reality series
2 years ago
Lindsay Lohan latest career move is the most bizarre one yet
Next Page