Lisa Armstrong tweets about being fired from Britain's Got Talent

Lisa Armstrong hit the headlines yesterday after being fired as a makeup artist from Britain's Got Talent.

It was also announced yesterday that we're going to see Ant McPartlin back on our screens sooner than we thought, as he will return to presenting next month on the talent show.

Ant took time out to concentrate on his well being this year and will go back to work in January as the new season of Britain's Got Talent begins filming. 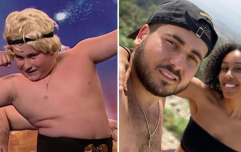 END_OF_DOCUMENT_TOKEN_TO_BE_REPLACED

But, as Ant arrives back, Lisa got the boot.

A source told The Mirror that it is "untenable" for the pair to be working so closely together.

"Although everyone is very fond of Lisa, it was clearly untenable to carry on working together.

"Ant and Dec are two of the most senior people on the show, sometimes these tough decisions have to be made."

However, now Lisa is tweeting about being fired, replying to fans who are supporting her on the social media site.

She began by thanking loads of her fans before saying she was "gutted" after being fired from the show:

It seems the saga continues...

popular
Vogue Williams slams man who refused to swap seats with her on plane
This is why the world is obsessing over Adidas Gazelles
Are we getting a mini heatwave in September?
Phoebe Bridgers and Paul Mescal go sale agreed on West Cork home
Ryanair, easyJet and BA issue warning to anyone boarding with smart bag
Laura Whitmore addresses negative Love Island comments
Scarlett Moffatt slams 'disgusting' pap for sneaking into hotel to take photos of her
You may also like
3 months ago
Britain's Got Talent star Johnathan Goodwin paralysed for life after stunt goes wrong
8 months ago
Britain's Got Talent star David Watson reportedly dies aged 62
3 years ago
This Irish lad left Britain's Got Talent viewers in tears with his incredible voice
3 years ago
Fans are all saying the same hilarious thing about the outfit Alesha Dixon wore last night
3 years ago
Ant McPartlin returns to BGT tonight and Amanda Holden says there's one adorable moment
3 years ago
Ant and Dec got the 'family back together' for new Britain's Got Talent season
Next Page