Love Island's Camilla Thurlow and Jamie Jewitt have welcomed their first child together.

The couple, who met on the ITV reality TV dating show back in 2017, announced that they were expecting their first child earlier this year. 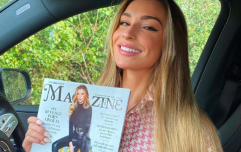 END_OF_DOCUMENT_TOKEN_TO_BE_REPLACED

Camilla announced the birth of her daughter, Nell Sophia, today on Instagram. Sharing a series of family photos, she wrote:

"Nell Sophia Jewitt, 4:32am, 27th October, 6lb 5oz. There may be a thousand new photos on my camera roll, but none of them could ever do justice to the way you have lit up our lives."

Camilla and Jamie have been together since 2017, after meeting towards the end of the third season of Love Island.

Jamie entered the villa late after Camilla had failed to make a connection with anybody else. They quickly formed a bond, fell in love, and finished second in the series behind Kem and Amber.

Camilla told Digital Spy previously that she and Jamie didn't have any immediate plans for marriage just yet, namely due to the fact that it's never been "a priority" for them.

END_OF_DOCUMENT_TOKEN_TO_BE_REPLACED

"We’ve always just tried to do things how they suit us, and neither of us are particularly big on marriage. I think it’s so wonderful for other people, and so brilliant," she said.

Girls With Goals || Her · Ep.156: 'Beauty Returns' - Rebecca O'Keeffe is BACK and we're talking about viral beauty trends
popular
Hilaria and Alec Baldwin welcome baby No.6 - five months after baby No.5
Here's what happens on every day of your menstrual cycle (roughly)
Someone has ranked the penis size of men from all over the world
Jessie J makes it Instagram official with new boyfriend
Palace source says THIS incident on the tour of Australia upset Meghan's staff
15 signs that prove someone is falling in love with you
Why Are Men so Obsessed With Boobs? The Answer is Pretty Surprising...
You may also like
3 weeks ago
Love Island plans to film in the UK this summer
1 month ago
Love Island's Zara Holland charged in Barbados for breaching Covid-19 rules
2 months ago
"Calling new islanders": Love Island is now casting for next season
3 months ago
Love Island is already looking for contestants for the 2021 series
3 months ago
Laura Whitmore: "You can’t control what other people do, but you can control what you put into the world"
4 months ago
What is the difference between harmless joking and online abuse?
Next Page