"We are both going through a very tough time with this atm..."

Maura Higgins and Chris Taylor have confirmed their split.

The Love Island stars, who appeared on the 2019 instalment of the ITV2 reality dating show, began dating long after the series ended after forming a solid friendship on the programme.

END_OF_DOCUMENT_TOKEN_TO_BE_REPLACED

Chris confirmed today that the pair have since parted ways.

"After some very heartfelt conversations, myself and Maura are very sad to announce that we have decided to part ways," she said.

"We are both still on very good terms and this was a mutual decision where nobody had done anything wrong. We will remain friends as we have since day one and I will always be in Maura's corner and have her back.

"We are both going through a very tough time with this atm, so please take any speculation with a metric tonne of salt, cos this is the only truth (and as always trolls can kindly fuck off). Thank you for all the love and support you've given us, it's been truly appreciated." 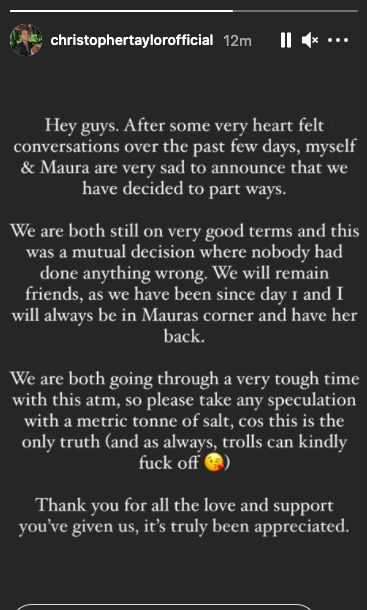 Maura shared her own statement confirming the split, saying that she and Chris "still love, care, and respect each other deeply."

She went on: "From the minute we met we have been very close friends and that will never change. There is no regret. Life is about raking chances. We wanted to make this work but have realised we are better being friends."

END_OF_DOCUMENT_TOKEN_TO_BE_REPLACED

Maura initially left the villa with Curtis Pritchard. The pair made it to the final and finished fourth, eventually beginning a relationship that lasted eight months.

Maura announced their split last year, stating: "Curtis and I have made the decision to separate. We enjoyed a great experience from our time in the villa and want to thank everyone for supporting our relationship.

“There is no easy way to get through a break up and no bad feeling on either side. We tried to make it work but it wasn’t to be, and I wish Curtis nothing but the best for the future."

Chris, who entered the villa a few weeks after Maura, left the villa with Harley Brash. He also emerged as a keen favourite among fans.

Girls With Goals || Her · Ep.161: Feeling Peachy - Sharon Keegan of Peachylean on being an absolute BOSS!
popular
The DIY frozen coffee recipe that's so delicious you'll never pay for an iced latte again
Khloe Kardashian has JUST confirmed she is pregnant
Gwen Stefani reportedly pregnant with baby number four
Someone has ranked the penis size of men from all over the world
Blac Chyna drops all Kardashian sisters except one from her lawsuit
Here's what happens on every day of your menstrual cycle (roughly)
Apparently this is the reason Kourtney Kardashian and Younes Bendjima split and we're annoyed
You may also like
6 days ago
Twink "heartbroken" after death of rescue dog Rita
1 week ago
Opinion: Meghan Markle has already won
1 week ago
Kim Kardashian says she didn't edit her waist in new Skims advert
2 weeks ago
Prince Harry and Meghan Markle welcome baby girl
2 weeks ago
Opinion: Kate Winslet's attitude towards her body is exactly what we need more of in media
2 weeks ago
Paul Mescal and Phoebe Bridgers are officially dating, maybe
Next Page