If you were to meet Michelle Obama, you would think you'd have some sort of grace and poise about you.

You wouldn't curse. You'd be polite. You certainly wouldn't vomit on her.

In an episode of Watch What Happens Live, Mariah Carey opened up about the embarrassing moment to host Andy Cohen.

It happened during the Christmas tree lighting ceremony at the White House in 2013, when Mariah's twins, Moroccan and Monroe, were two.

She remembered the moment, saying: "Rocky spit up on Michelle Obama's dress, and it was one of the most humiliating things that ever happened to me.

"She was like, 'Thanks to you, I'll never be able to wear this dress again, Rocky. So thank you'."

We'll admit, we'd absolutely bury ourselves into a hole if that happened to us! 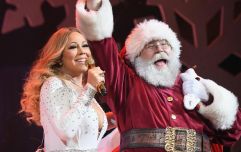 END_OF_DOCUMENT_TOKEN_TO_BE_REPLACED

Meanwhile, a caller rang into the show to ask her opinion of Britney Spears.

Before giving a little smirk, she said: "Em, I don't quite recall, there were a couple things that happened that night, There were cocktails, there were other stuff... we were in California.

"We've been around each other a couple times, from start and she's always been a sweetheart."

popular
The €9 buy fans swear is an EXACT dupe of Estée Launder's popular Double Wear foundation
Between seasons: These fab sale buys will see you through to autumn
It turns out we're all peeling oranges wrong and this madness has to stop
How to cope in this humidity: From sleeping better to dealing with frizzy hair!
This no bake 'Chocolate Refrigerator Cake' recipe has us drooling
Billy Connolly Has Harsh Words With Russell Brand, After Brand Asks a Woman to Flash Him...
The Queen has banned Meghan Markle from wearing any of Princess Diana's jewellery
You may also like
3 months ago
Get ready for Rise up New York! where three of our favourite divas will be taking to the (home) stage
7 months ago
Mariah Carey is still making a killing from 'All I Want For Christmas Is You'
7 months ago
WATCH: Mariah Carey releases new 'All I Want For Christmas Is You' video and it's extra AF
7 months ago
Mariah Carey's 'All I Want For Christmas Is You' finally reaches No.1 in the US
1 year ago
Mariah Carey has just announced she's playing a HUGE concert in Ireland
1 year ago
Here's how much money your fav Christmas song makes in royalties each year
Next Page