Molly-Mae received widespread backlash for comments made about success.

Maura Higgins has defended her Love Island co-star Molly-Mae Hague after she attracted backlash for comments she made during a recent podcast appearance.

On Steve Bartlett's The Diary of a CEO, Molly-Mae said: "You’re given one life and it’s down to you what you do with it. You can literally go in any direction. 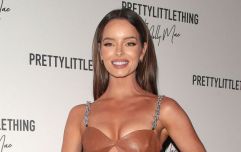 END_OF_DOCUMENT_TOKEN_TO_BE_REPLACED

Since then, many have called out Molly-Mae for failing to acknowledge the mechanisms of privilege and the very real barriers that exist for people from marginalised backgrounds.

END_OF_DOCUMENT_TOKEN_TO_BE_REPLACED

She wrote: "Molly Mae is young, who's had a lot of success really quickly, and not a lot of 'life'. So I can understand why she holds those views. We all say things when we're younger and look back and think 'well that was stupid' lol. No shade I wanna live in her bubble."

Maura Higgins then commented saying that she was "surprised" to see Shaughna's input.

She wrote: "Surely you know as someone in this industry how lonely and scary it can be when the whole internet is slamming you. Your [sic] entitled to your opinion yes but I'm really surprised you commenting on this at all."

Shaughna replied to Maura saying that she was tweeting in defence of Molly Mae.

She wrote: "She's young and successful, it's not her fault she has those views. Like I said, no shade, just jel lol"

Molly-Mae has yet to address the widespread backlash.

popular
Smyths issues warning to parents ahead of Christmas
So, William and Harry have a step sister... and who knew?
Netflix's true crime series Sins of our Mother is seriously insane
Popular Irish cafe bans customers wearing pyjamas
Post Malone dramatically falls through stage during concert
Why Are Men so Obsessed With Boobs? The Answer is Pretty Surprising...
Everything coming to Netflix this October
You may also like
3 months ago
Love Island's Tasha secretly dated Maura Higgins' Strictly ex Giovanni Pernice
4 months ago
Wait, is Maura Higgins in a new relationship?
6 months ago
Maura Higgins shares update after undergoing tests for illness
7 months ago
Maura Higgins addresses Love Island hosting rumours
7 months ago
Maura Higgins opens up about being body-shamed online
8 months ago
Molly-Mae Hague responds to backlash over controversial comments
Next Page