Meghan Markle is 'devastated' over her dad's latest interview

"She was once again blindsided by a father who supposedly cares about her."

Meghan Markle is said to be 'devastated' over her father's latest interview.

END_OF_DOCUMENT_TOKEN_TO_BE_REPLACED

He revealed to Good Morning Britain that Prince Harry had gotten in touch with him before he asked Meghan to marry him and also spoke about the prince's political beliefs.

A source close to the royal had said that Meghan "doesn't understand" why her dad has shared more details of her life with the public again.

"She is trying so hard to fit in and adapt to this very new way of life and she was once again blindsided by a father who supposedly cares about her and doesn’t want to embarrass her," the source told Yahoo News. 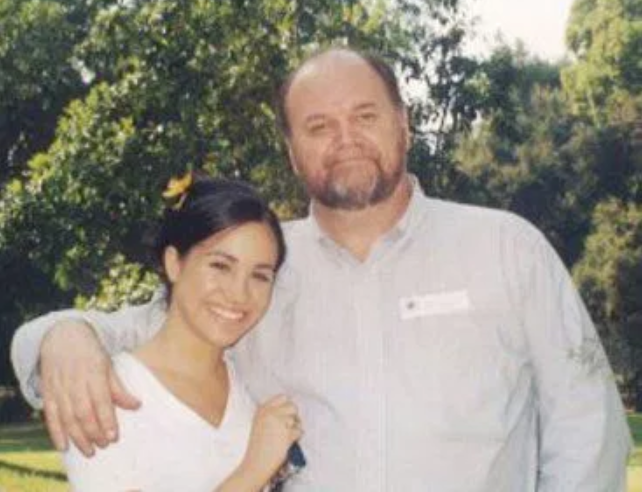 “Given the media circus surrounding her father’s actions before the wedding, Meghan had hoped he would have learned his lesson. She is devastated over this."

"Harry did his best to prepare Meghan for what to expect from the media as a member of the royal family, but it’s impossible.

"Her experience as an actress on a popular nighttime soap pales in comparison. The knives are out and, sadly, most of them appear to be coming from her own family.”

END_OF_DOCUMENT_TOKEN_TO_BE_REPLACED

Thomas, who reportedly earned "a few thousand pounds" for his interview, staged paparazzi photos in the weeks before the royal wedding.

He had been due to give Meghan away on her big day but dropped out just days before to undergo heart surgery, with Prince Charles stepping in to do the duty.

"I was honoured, I can't think of a better replacement than someone like Prince Charles," Thomas told Good Morning Britain. 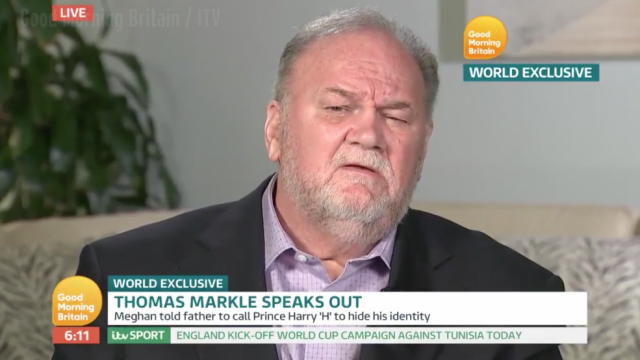 "I absolutely wanted to walk my daughter down the aisle."

END_OF_DOCUMENT_TOKEN_TO_BE_REPLACED

Thomas also revealed that he'd had number of phone conversations with his daughter's husband.

"It's been over the phone, we've had some interesting conversations on the phone. He's a smart guy. He's an interesting guy.

"I was complaining I didn't like Donald Trump. He said give Donald Trump a chance, I sort of disagreed with that."

He added; "I think he was open to the experiment (of Brexit)."

popular
Irish man dies after car hit by falling tree
Toy Show viewers can't get enough of Finn from last night
Viewers in bits after Barry Humphries congratulates Dermot O'Leary on coming out
Four teenage boys arrested on suspicion of murdering 12-year-old girl in UK
We finally know what happened to Sam in And Just Like That
I'm A Celeb bosses 'fear mass walkout' as three stars have medical treatment, report says
These are the counties most likely to have a White Christmas in 2021
You may also like
1 week ago
WATCH: Meghan Markle takes part in hidden camera prank on Ellen
1 week ago
Meghan Markle says Royals were "constantly berating" Harry over her relationship with her father
2 weeks ago
Prince Harry says 'Megxit' is a misogynistic term created by a troll
2 months ago
Piers Morgan wins Ofcom complaint over Meghan Markle comments
3 months ago
Meghan Markle's brother hits out at her as he enters Big Brother house
3 months ago
Steal her style: How to recreate Meghan Markle's sleek home office on a budget
Next Page