We bet one special person just popped into your head right now.

Michelle and Barack Obama have always been goals. As cringey as it sounds, there's no other way to put it. They endlessly hold each other up and support each other - and it shows.

From sentimental social media posts to backing the other person and encouraging them in all their endeavours, their 27-year marriage lasted two terms in the While House with two beautiful children.

Michelle had a keynote conversation with CBS anchor Gayle King during the Essence Festival in New Orleans this weekend and came out with some sound relationship advice we should all listen to.

"And ladies and gentleman, that’s why it’s so important to marry somebody that you respect," Michelle continued.

27 years ago, this guy promised me a life full of adventure. I’d say he’s delivered. Here’s to our next chapter of becoming empty nesters and discovering what’s next—while still feeling the magic that brought us together all those years ago. Happy anniversary, Barack. ? 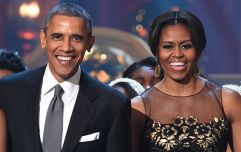 END_OF_DOCUMENT_TOKEN_TO_BE_REPLACED

The former First Lady then compared marriage to playing a game together - you both have to be in it to win it.

"My husband is my teammate. If we are going to win this game together, he has to be strong and he has to be okay with me being strong.

"I do not want a weak player on my team, nor does he. But sometimes, we accept weak in one another because it feels easy. And be cautious of the man or woman who wants just the easy person."

Some pretty sage advice right there.

popular
Will Smith admits to 'failing miserably' in 21-year marriage to Jada Pinkett Smith
QUIZ: How well do you remember the 2005 movie Pride & Prejudice
Someone has ranked the penis size of men from all over the world
5 new additions to Netflix to spend your Saturday night watching
An old photo of Nicole Kidman after confirming divorce from Tom Cruise is doing the rounds
Here's what happens on every day of your menstrual cycle (roughly)
After days of silence, Scott and Sofia finally comment on the break up rumours
You may also like
2 months ago
Becoming: A Michelle Obama documentary is coming to Netflix next month
7 months ago
Michelle Obama has shared a family photo for Thanksgiving, and we hardly recognise Malia and Sasha
7 months ago
Michelle Obama has been nominated for a Grammy Award, and she bloody deserves it
9 months ago
Michelle Obama is releasing her second book next month
1 year ago
Michelle and Barack Obama are making a brand new Netflix show
1 year ago
Michelle Obama just gave Meghan Markle the BEST advice ever, and we're weeping
Next Page