"I would never intend to hurt or upset anyone by anything that I say or do."

Molly Mae Hague has responded to the recent backlash she received for her comments on success.

The influencer came under fire last week after expressing the belief that "everyone has the same 24 hours in a day" and that success is down to the actions of an individual - as opposed to social status or wealth.

Many took issue with the 22-year-old's comments, which were made on an episode of the YouTube podcast Diary Of A CEO, calling them "tone deaf"  and "offensive".

Taking to Instagram on Monday, Molly Mae apologised to the people who were affected negatively by her words.

"I wanted to come back online today as normal but I feel before I do I just wanted to say this...," she wrote.

"When I say or post anything online, it is never with malice or ill intent. I completely appreciate that things affect different people in different ways however I just want to stress that I would never intend to hurt or upset anyone by anything that I say or do.

"I apologise to the people that have been affected negatively or misunderstood the meaning of what I said in the podcast, the intentions of the podcast were only ever to tell my story and inspire from my own experience."

She concluded: "Love to you all, always." 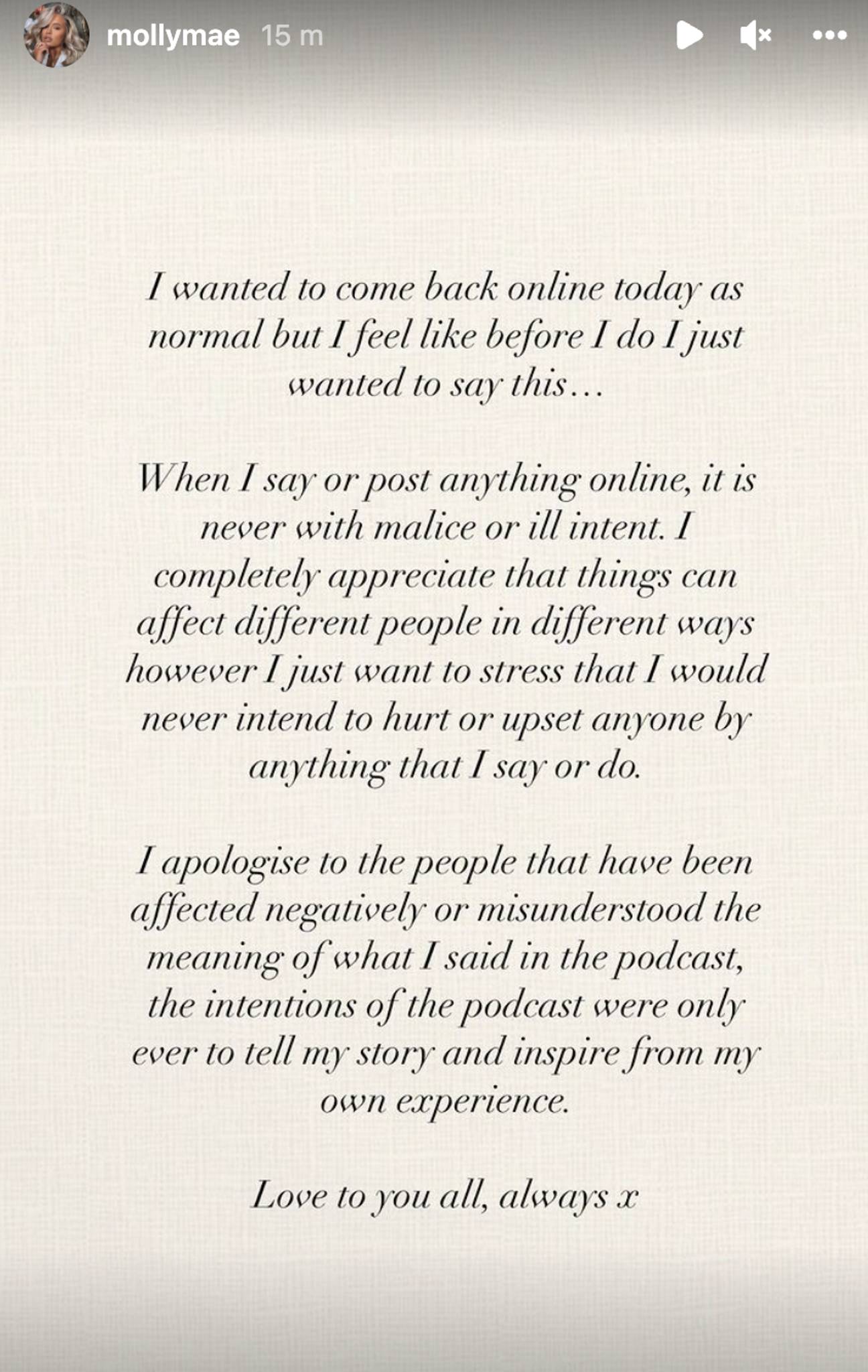 It comes as Diary Of A CEO's host, Steven Bartlett, has spoke out in defence of the Love Island star's comments, suggesting that the widespread criticism was a result of sexism - calling out the "double standard that successful women face".
"Molly Mae did an interview on my podcast, yesterday a soundbite from that interview went viral, she trended No.1 on Twitter, every newspaper covered it and MP's weighed in," he said.
Advertisement
"I've had male guests say what she said. No-one cared. But when Molly says it, she's crucified? Crazy.
"I have become aware of the double standard that successful women face. If I interview a man he can brag about money, take full credit for his success and talk about his cars?"
Advertisement
"If I interview a successful woman, she's got to tip toe around her success and watch her words."

popular
Madeleine McCann investigators say they've found new clues that could "heavily incriminate" suspect
Gardaí investigating woman's death after body found in apartment
These are the top baby names for 2022
People are only realising Kendall Jenner and Gigi Hadid are related and the reactions are gas
Teen who pushed girl “head first” under Dart to face trial in adult court
Emmerdale star Toby Kirkup died hours after being discharged from hospital, inquest finds
Man charged in connection with Ashling Murphy's murder
You may also like
1 week ago
Opinion: The takedown of Molly-Mae: Should cancel culture be this gleeful?
1 week ago
Love Island now open to non-binary contestants
1 week ago
Love Island's Liberty Poole opens up about love life following split from Jake Cornish
1 week ago
Molly-Mae Hague responds to backlash over controversial comments
1 week ago
Greg O'Shea confirms split from girlfriend after two years
2 weeks ago
Molly-Mae Hague criticised for "tone deaf" comments about success
Next Page