Meghan Markle's frustration at having her independence taken away has led her to snap at the people working around her, it's been claimed.

This attitude is what has rubbed staff up the wrong way, a royal source has said.

The insider who was on the royal tour of Australasia in the autumn has told Page Six of an incident that showed this frustration while the couple were visiting Sydney.

END_OF_DOCUMENT_TOKEN_TO_BE_REPLACED

"During their tour, just before they were about to go to the Invictus Games, Meghan was bawling at her hairdresser to get her hair right, while at the same time someone was ironing the bottom of the dress she was wearing," they told the publication.

Longtime royal correspondent Duncan Larcombe has revealed that Harry behaved very differently on the tour to previous ones.

Its tradition for the royals to socialise with members of the press who travel on tours with them, he said - but not this time.

“They basically blanked the media on this tour, which is very short-sighted,” Larcombe told Page Six.

"All of Harry’s staff have always thought he was fantastic, but the two of them [together] are high maintenance."

Larcombe said he understands where the couple is coming from. 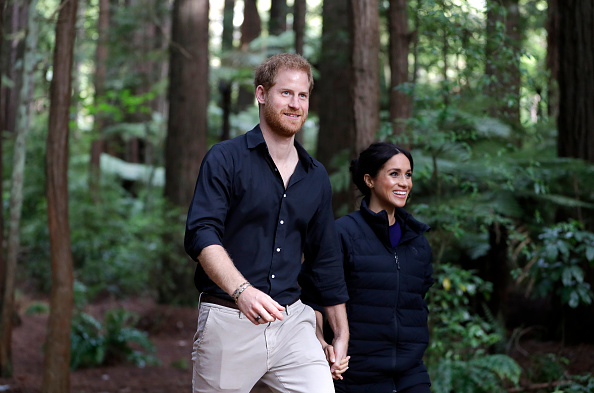 END_OF_DOCUMENT_TOKEN_TO_BE_REPLACED

"Harry wants to be protective of Meghan,” he continued. “If she’s getting frustrated and stressed, he is the one reading the riot act to the staff and doing the demanding on her behalf.

“But you can’t blame Meghan, she’s gone into her biggest role yet and she’s put her heart and soul into it.

"Yes, she is firing off e-mails to staff at 5 am, but she’s super-keen and Harry is taking his lead from her.

"He is under a lot of pressure behind the scenes.”

Girls With Goals || Her · Ep.161: Feeling Peachy - Sharon Keegan of Peachylean on being an absolute BOSS!
popular
Emilia Clarke is set to be the next Marvel superhero
A documentary on the murder of Grace Millane is coming soon
Bride dislocates her leg during her first dance in viral clip
Jennifer Lopez just shared a steamy snap of herself and Ben Affleck – and WOW
I got laser hair removal for the first time and here’s how it went
Here's what happens on every day of your menstrual cycle (roughly)
The sad reason why viral gymnast, Katelyn Ohashi, isn't on the USA Olympic team
You may also like
1 week ago
Meghan Markle is producing her own Netflix series
1 month ago
Meghan was right to say Archie "won't be a prince" under Prince Charles
1 month ago
Prince William "threw Harry out" after "fierce and bitter" argument
1 month ago
Meghan Markle will not be returning to the UK this summer with Harry
1 month ago
Why we probably won't see a first picture of Meghan and Harry's baby girl for a while
1 month ago
"Very old" human bones found near Harry and Meghan's home
Next Page