Pregnant in lockdown: Teodora Sutra on how crocheting has kept her sane

The model is expecting her first child in July.

On this week's episode of Girls With Goals we're joined by model and soon-to-be-mum Teodora Sutra. The stunning model, who is originally from Latvia, is taking part in the #ModelsAtHome Instagram series with her agency 1st Options Models. It's a glimpse into the lives of Ireland's top models and how they're coping with lockdown without walking the runways and shooting campaigns. Like many industries the fashion world in Ireland has been deeply affected by the Coronavirus.

Having moved to Ireland at the age of eight we asked Teodora (or Teo) how she adjusted to life in Ireland and her answer was the stuff of childhood dreams:

"I was really, really excited about it but I was also so disappointed that everything was the same. I think my imagination was a little but wild and I thought that once we left Latvia that trees would be a different colour and the sky would be green, but it would just be the same thing in a different colour!"

It's a very valid point!

Teo has a lot to look forward to in the coming months, she's expecting her first baby in July and she told us that although it's an extremely difficult time for many she's staying calm, relaxed and going with the flow:

"For me it worked out and I know how lucky I am that it hasn't affected me apart from being stuck at home and not being able to see my family... I mean, it's gotten me to just be relaxed and enjoy just doing nothing, I think it's the best thing for the baby too because the baby is super relaxed!"

Crocheting has also become a firm favourite for Teo, listen to the full episode below as she explains why it relaxes her and how it differs from knitting (yes I don't know the difference).

@1stoptionmodels shared this photo yesterday in their new series of #ModelsAtHome ... basically a little glimpse into what we’re all upto while we are unable to walk the runways or get snapped on shoots.. ? I miss work a lot.. (all tho with the baby belly popping I was pretty much at the stage of hanging up my modelling boots for a while anyway right before this isolation thang began) so I had already stocked up on loads of baby yarn & soft wool in @sostrenegrene & @springwools ready for getting craftsy at home making baby clothes. I did run out of all my wool fast in the first two weeks so got lots more delivered from @hobbii_yarn . Crochet is so relaxing, very therapeutic and a great way to pass time. It’s so rewarding seeing an item of clothing once you’ve finished a project , that you have hand made!!! ?? #YouTube is amazing for tutorials on absolutely anything you could possibly wanna make. It’s awesome!! ? #crafts #crochet #knitting #crochetlove #batclothes #babyromper #woolysocks #handmade #stayinghome #stayingentertained #fun #handson ? 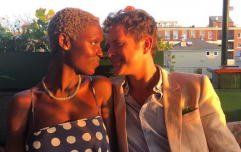 END_OF_DOCUMENT_TOKEN_TO_BE_REPLACED

We're also joined on this week's show by London-based Irish band Whenyoung, they've just released their new single 'The Prayer' which they wrote and recorded while in lockdown in the UK. Friend of the show and model Cathy Costello also joins us to talk about her skin condition vitiligo and how she's dealing with it.

popular
'Beard-baiting' is now apparently a dating trend - and we're all for it
Curtain bangs are trending - here's everything you need to know
10 women on the relationship deal-breakers they learned the hard way
QUIZ: How well do you really remember the first episode of Sabrina The Teenage Witch?
Rose Leslie and Kit Harington share baby news with super cute photo
15 tattoo ideas you'll adore if you love the sea
Cheese, chocolate or pasta? What your food cravings mean
You may also like
2 days ago
Royal baby announcement: Princess Eugenie of York is pregnant with her first child
8 months ago
Gary Beadle 'praying' for answers as his newborn baby makes sixth hospital visit
8 months ago
Fair City's Amilia Stewart is 'counting down the days' until she gives birth
10 months ago
Rosanna Davison shares another glimpse of her daughter while thanking friends and fans
10 months ago
Chris Brown has welcomed his second child with ex-girlfriend Ammika Harris
10 months ago
Rosanna Davison and Wesley Quirke share the first photo of their baby girl
Next Page