The resemblance is uncanny.

22-year-old Danielle Bazergy, has made a name for herself for her undeniable similarities to the Duchess of Sussex, Meghan Markle.

So much so, she's made money off being Meghan's doppelganger, appearing on local TV and in newspapers, modelling as the former Suits star.

END_OF_DOCUMENT_TOKEN_TO_BE_REPLACED

The Sydney-based fitness guru says that she's often stopped and asked if she is Meghan, especially now that the royal is in Sydney, with Danielle recalling one day she was stopped 23 times. Not a bad complaint, eh?

But the moment of Danielle's life was made last Friday when the Australian finally got to meet her icon and "twin". Recalling the moment, Danielle explained how lovely both Meghan and Harry were.

Danielle has been told she looks like Meghan since the early Suits days.

“How they seem in the media is how they are in real life – so down to earth and kind-hearted.

“Harry is one witty and cheeky man!”

Danielle even posted an image of the moment she met Prince Harry and Meghan and it's safe to say Harry had to do a double-take! 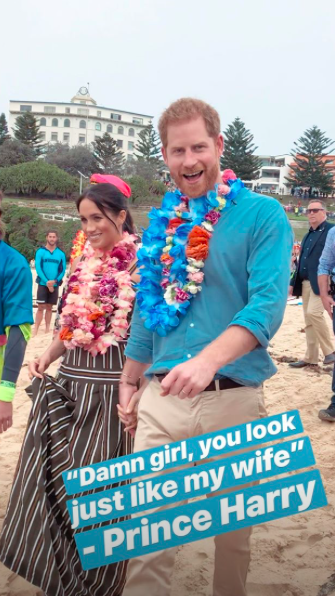 “I think she’s a remarkable woman.

“I truly admire her work in the areas of equality, poverty, diversity, women’s health, women’s rights and so many other noteworthy causes over the past many years.

“Briefly meeting her last week was inspiring and I really do hope to be given the opportunity to meet her again to talk to her about how I want to make my own difference in this world! Danielle told The Sun.

So sweet. Prince Harry and Meghan Markle continue their 16-day tour which has already seen them visit Sydney, Dubbo, Melbourne, Fraser Island, Suva in Figi and now, they're on to Tonga.

popular
Stevie Nicks leads tributes following the death of Christine McVie
Mollie King announces death of her father just weeks after welcoming her first child
Gwen Stefani reportedly pregnant with baby number four
Gifts for Him: 18 affordable presents for your old fella, brother or boyfriend this Christmas
Here are the first four people officially heading onto Dancing With The Stars
Why Are Men so Obsessed With Boobs? The Answer is Pretty Surprising...
"You can’t imagine what it feels to have had a baby and yet feel like you didn’t"
You may also like
5 days ago
Rules around blood donation have changed in Ireland as of today
2 weeks ago
Iran has issued the first death sentence for protesting
3 weeks ago
Iranian actress Taraneh Alidoosti removes headscarf in social media post
3 weeks ago
Government's five-day domestic violence leave plan criticised
1 month ago
Meteor shower to be visible over Ireland tomorrow
2 months ago
Tayto Park has been renamed Emerald Park
Next Page