Loose Women's Stacey Solomon has revealed the reason she doesn't feel the need to get married to her boyfriend, Joe Swash, any time soon.

The former X Factor contestant, who has been dating Joe since 2016, was debating the topic of marriage during Friday's episode of the ITV chat show.

"I totally appreciate that some people just would love to get married.

"I don't necessarily agree that it adds something to your relationship cause I personally don't feel that it would add anything to my relationship."

Her fellow panelist Gloria Hunniford pointed out that it "might" add something to their relationship, Stacey insisted that it wouldn't - as she saw marriage as a "piece of paper." 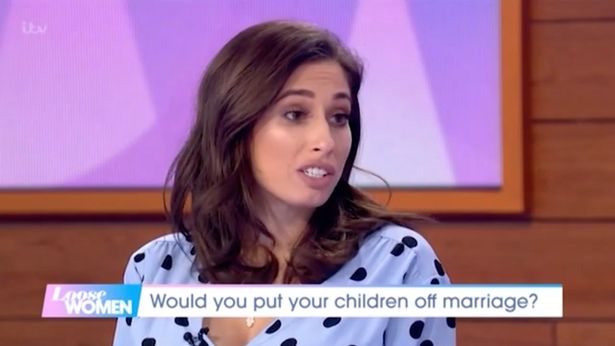 "If you're religious or you have real ties to marriage and it does really mean something to you I get that, and it takes you to another level spirituality or however which way you look at it.

"I think for me and Joe, for example, I honestly wouldn't see any difference in our love for each other, whether we had a marriage certificate or not."

When asked if she would like to get married to Joe one day, the mum-of-two admitted that she liked the idea of a "ceremony where we celebrate our love".

'Some people would love to get married but I personally don't think it would add anything to my relationship' - @staceysolomon pic.twitter.com/aDY8yIIVr4

"I'd love to have a ceremony where we celebrate our love.

"But I'm not extremely excited are really feel the need to have a marriage certificate. And that is what marriage is to me."

Gloria said that getting married may make her and Joe more of a "unit", however Stacey disagreed again.

"To me a unit is family, is love, which is present with or without the piece of paper."