In new excerpts the couple shared with Radar Online and the Daily Mail, the couple blamed their turbulent childhood on their drug addictions:

"It was chaos all the time. I didn't like it, and I didn't thrive on it, but it was normal to me."

END_OF_DOCUMENT_TOKEN_TO_BE_REPLACED

Catelynn also detailed how she was attacked by one of her mother’s boyfriends when she was 13-years old:

"This man picked me up by the neck [and] threw me to the ground. [He] pinned me down on the floor between the toilet and the shower and started choking me."

Both also openly discuss their own past drug use, counting cocaine, ecstacy, cough bottle, sleeping pills, and Ritalin amongst them. 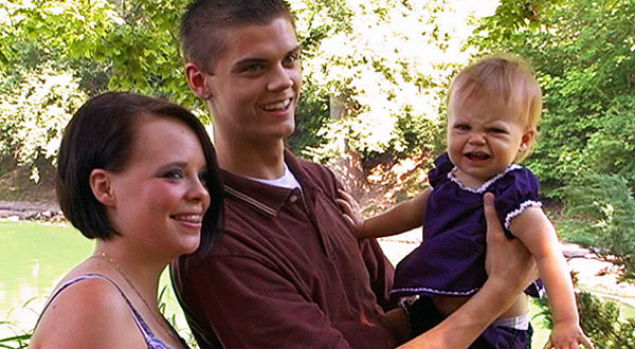 Catelynn outlines an incident where she passed out after taking drugs and later woke up in the middle of the road, writing:

"I didn't even know how long I'd been there. I could have been run over!"

Tyler revealed he suffered seizures from drug use and had first tried alcohol and marijuana from the age of eight.

END_OF_DOCUMENT_TOKEN_TO_BE_REPLACED

Neither had been given the "sex talk" by their parents, and "we were not being safe at all. We were using the pull-out method, and that was it. I didn't wear condoms and Cate never went on birth control ... we just didn't feel like we had to."

It was the couple’s unplanned pregnancy that forced the pair to change their lives – and they said they decided to share their story now and with MTV to offer encouragement to other teens in their situation.

The pair shot to fame after they decided to put their daughter Carly up for adoption on the MTV show Teen Mom.

popular
Woman killed in Clare crash named as Peggy Twomey, mother of Marty Morrissey
Nick Cannon's 5-month-old son Zen has passed away
Mrs Brown's Boys star Fiona O'Carroll split from co-star husband after 15 years
Someone has ranked the penis size of men from all over the world
Woman in her 90s dies after horrific road crash in Clare
Maura Higgins ends up in A&E with everyone's nightmare injury
People are losing it over Lana del Rey wearing a Shein dress on the red carpet
You may also like
2 years ago
Turns out, this colour of wine gives you the WORST hangover
5 years ago
Gwen Stefani Receives Massive Backlash After "Insulting" April Fools' Prank
5 years ago
Katie Price Names And Shames The Twitter Trolls Bullying Her Son Harvey
5 years ago
Kim Kardashian Blasts "Body-Shaming and Slut-Shaming" In Brilliantly Honest Post
5 years ago
WATCH: Emma Watson Launched HeForShe Arts Week On International Women’s Day
1 week ago
Sheridan Smith "lucky to be alive" after awful road collision
Next Page