Jeremy McConnell's Starbucks cup is going to annoy you

What exactly is going on here?

The father of one was also ordered to complete 200 hours unpaid work, pay Stephanie £1,000 in compensation and carry out a Building Better Relationships course with the Probation Service.

END_OF_DOCUMENT_TOKEN_TO_BE_REPLACED

According to The Daily Mail, Jeremy's community service will take place in Wales and will include cleaning graffiti but so far, it seems that he's taking a very light-hearted approach to the idea.

The 27-year-old shared a photo of his Starbucks cup on Instagram Stories, standard social media behaviour you might think...until you notice the message written on the cup. 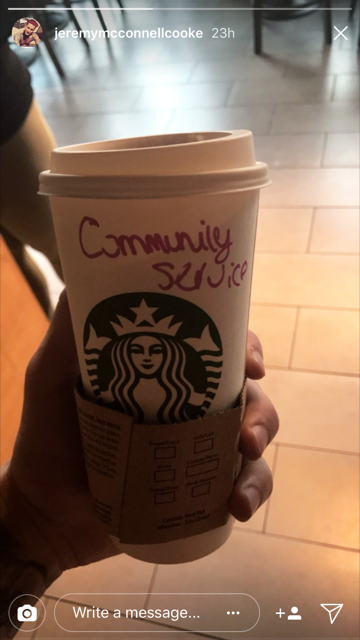 Scrawled in red marker, the cup reads 'Community Service' and it's been suggested that instead of his name, this was what was his coffee order was given as.

Unsurprisingly, this has annoyed people as it appears he's not all that bothered about his community service, or so it seems anyway.

Last week, the Swords native was convicted of trespassing and ordered to pay a €150 fine after entering a house in Skerries, Dublin without permission after he was allegedly chased from a house party.

popular
16 and Pregnant star Jordan Cashmyer dies aged 26
Gardaí seize two cars linked to Ashling Murphy death as they question new suspect
Woman dies following Co. Meath house fire
Here's where all the 149 tickets that won €36,687 in Saturday's Lotto were sold
A celebrity hairstylist just shared a genius hack for the perfect messy bun
Dancing on Ice professional Sean Rice dies at 49
Giant asteroid "bigger than any building" to pass Earth on Tuesday
You may also like
8 months ago
Starbucks' new Happy Hedgehog cups would be the perfect pairing for a park date
9 months ago
Starbucks has a bubblegum-flavoured frappuccino on their menu – but you need to hurry
1 year ago
Starbucks' latest ad is a powerful leap forward for transgender visibility
2 years ago
Bah-humbug! We're consuming a LOT of calories when sipping on festive coffees
2 years ago
The limited edition Starbucks Christmas drinks are here, and they sound delicious
2 years ago
The Phantom Frappuccino is the Starbucks Halloween special for 2019, and it's pretty strange
Next Page