Fabulous taste, in fairness to him.

The most recent card-carrying member of the Derry Girls fan club is multi-award winning director Martin Scorsese, as revealed in an interview which is currently re-circulating on Twitter. 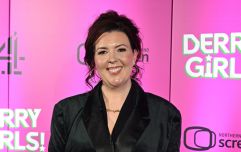 END_OF_DOCUMENT_TOKEN_TO_BE_REPLACED

Scorsese was asked about what he's currently watching during a discussion with The Economic Club of Chicago last month, to which he replied “I watched the other night Derry Girls.” The crowd then burst into a rapturous applause, obviously.

The Taxi Driver director responded by shaking his fist, jokingly scorning 'those nuns'.

And as all Derry Girls fans will know, not much gets past 'those nuns', especially Sr. Michael. Actor Siobhán McSweeney, who plays the beloved eye-rolling character retweeted the video, with the caption "Good morning. I’m ded".

END_OF_DOCUMENT_TOKEN_TO_BE_REPLACED

Derry Girls creator Lisa McGee also shared the clip, with the caption "Excuse me while I drop dead and actually die a death."

While we said our tearful goodbyes to Erin and the gang in May of this year, the final season of Derry Girls only landed on American Netflix at the start of October, which would explain the timing of Scorsese's binge.

Naturally, we want to know more - what does he make of Jenny Joyce? Did he cry during the bonus Good Friday Agreement themed episode? Does he believe in Erin and James as a couple? Will he direct the Christmas Special? Get back to us any time Martin, no rush, we know you're busy etc etc.